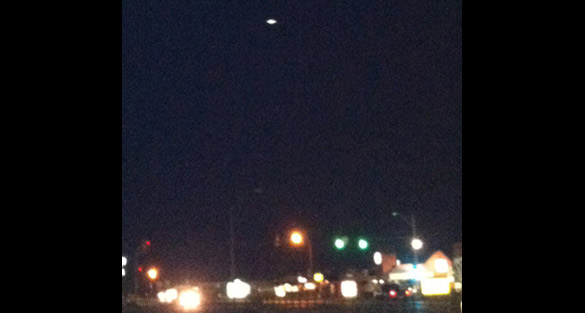 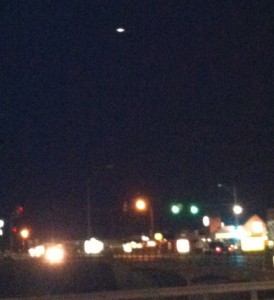 A witness with the nickname tcastellon has submitted an iPhone UFO photo to Dallas TV station WFAA. The witness says the photo was captured at a 7-11 in Euless, Texas, a suburb of Dallas. The witness wrote:

Wednesday night about 11:30 pm I was heading to Fort Worth on airport freeway. When I got to Euless I stopped at a 7-11. As I came out of the 7-11, I noticed about 5 or 6 people standing in the parking lot aiming their iPhone cameras to the night sky.

They were looking at a shimmering shape way high in the sky. It was not moving. I would say it was at least 1000 feet up. I asked one person ‘what’s that?’ He said, ‘I don’t know, I think it’s a UFO.’ He told me he had been watching it for awhile, that at times it would flash all kinds of lights. He also said that it had floated around for awhile before it came to a stop.

I took a picture of it and watched it for about five minutes. Suddenly, it flashed a bunch of lights. Then the lights went dim. It was cigar shaped, the left side was a dim green glow and the right side was dim red glow. I watched it for a few more minutes and then I got in my car and took off. The picture I posted is from my iPhone.