A small UFO crashed in the Norfolk, Virginia neighborhood of Ocean View on the evening of Tuesday, July 30.

Local residents contacted authorities, and emergency crews were dispatched to the location of the mysterious object at approximately 6:00 pm. The Norfolk Fire Department, the U.S. Navy, and the Norfolk Bomb Squad were all reportedly dispatched to the scene. 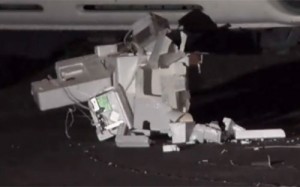 According to WVEC ABC 13, “The bomb squad used a robot to get a closer look at the square Styrofoam box package in the street. The box had a balloon attached to it and one person told authorities it was making a strange noise.”

Nearby residents were evacuated from their homes, and local traffic was restricted as investigators worked to identify the object. At approximately 8:40 pm, authorities determined the object was likely a weather balloon from NASA’s Wallops Flight Facility, located on Virginia’s Eastern Shore. NASA describes, “Wallops is now NASA’s principal facility for management and implementation of suborbital research programs.” Whether the object actually belongs to NASA is unknown.

The local media’s coverage of this incident was mild and straightforward. But UK news site The Register asserts that something much more sinister took place in Virginia. According to The Register, “People living and working in the immediate area were rapidly evacuated and the district was sealed off by a combination of police and military personnel. The presence of operatives from shadowy federal agencies in overall charge of the incident was – of course – not mentioned by spokesmen briefing the media.” Experts from NASA were even allegedly on site. And The Register reports that “the mystery object from the sky was apparently loaded onto an unidentified government vehicle and removed from the scene.”

Which story do you believe? Was Norfolk, VA the site of a secretive UFO recovery operation, or could these “shadowy federal agencies” dealing with the crashed object simply have been members of the bomb squad as reported by local media? Share your thoughts with us in the comment section below, or on our Facebook page.