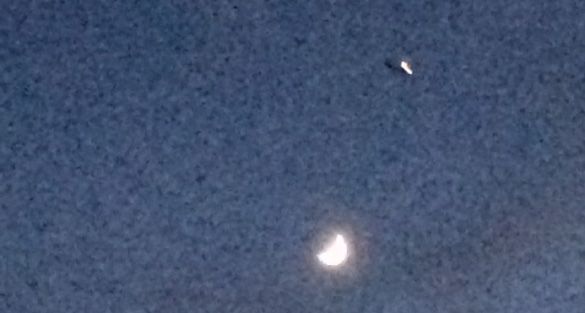 A Virginia witness at Manassas reported watching a disc-shaped object hovering over the city, according to testimony in Case 67890 from the Mutual UFO Network (MUFON) witness reporting database.

The event occurred about 8:51 p.m. on May 20, 2015, when the witness was driving home to Manassas along the Prince William Parkway. 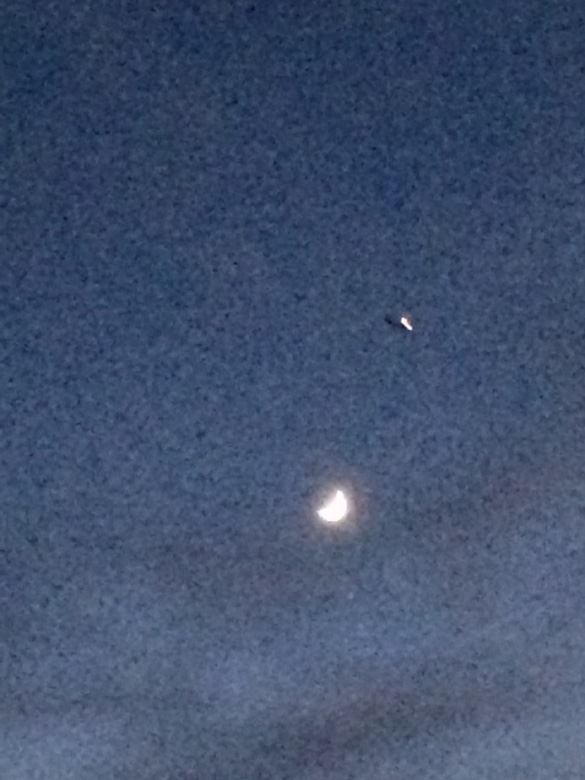 “It had rained slightly a little but had pretty much stopped,” the witness stated. “There were some light, thin clouds out but nothing heavy. The traffic was very light. As I approached the city I noticed two or three airplanes traveling from the west toward the northeast probably to Dulles airport some distance away. It was easy to see them as it was dusk out and the sun had almost gone down but it was not dark yet. I noticed the moon rising to my left from the tree line and also the North Star above the moon popped out.”

Then the witness noticed a “glinting motion” in the sky moving back and forth from the northeast to the northwest.

“The glinting motion was kind of broken up or seemed patchy. It wasn’t real fast but fast enough to notice. It sort of looked like just more stars showing up in the sky. After two or three minutes the glinting light seemed to show more of a shape and stopped a couple times between motions. That is what really caught my attention to the point it looked very odd and out of place.” 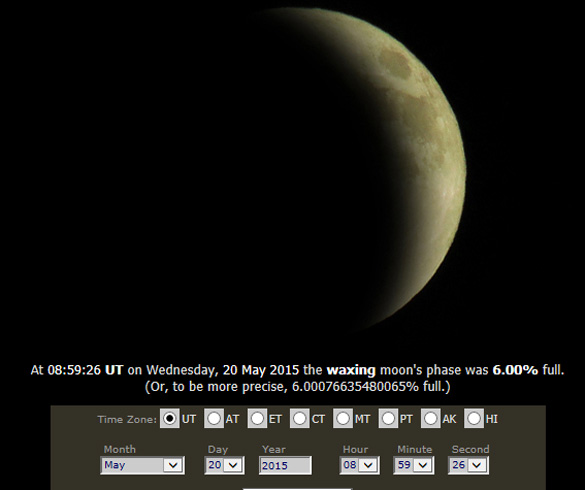 Moon phase at the time of the sighting. (Credit: MUFON)

The witness pulled the vehicle to the side of the road for a better look.

“It continued to move sporadically and stopped in front of the moon where I could clearly see a shape. There were no real lights that I could see on the shape but it seemed to shine on one side, almost like a reflection, but I could not see anything that would shine light on it.”

The witness watched the object for about five minutes, before getting back in the vehicle and proceeding. But then the witness began attempting to take photos of the object, and pulled over a second time.

“I continued to take pictures while I was parked. I believe I was watching for total of about 20 minutes or so total. There was no sound at all but I could never really gauge how far away the object was or exactly how high in the sky.” 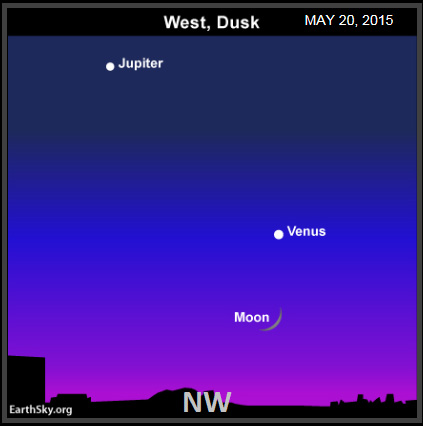 The position of Jupiter and Venus at the time of the sighting. (Credit: EarthSky.org)

During this time other normal air traffic was seen.

“Throughout my time watching the object a number of planes passed from the west moving to the northeast toward Dulles airport. A small plane also traveled through the area from the southeast to the northwest maybe toward the Manassas Regional Airport. It was very obvious that they were planes as I could see the lights as they approached and the sound of engines grow as they came close and subsided as they moved away.”

After 20 minutes it became harder to see the object and the witness again got back into the vehicle and moved on. 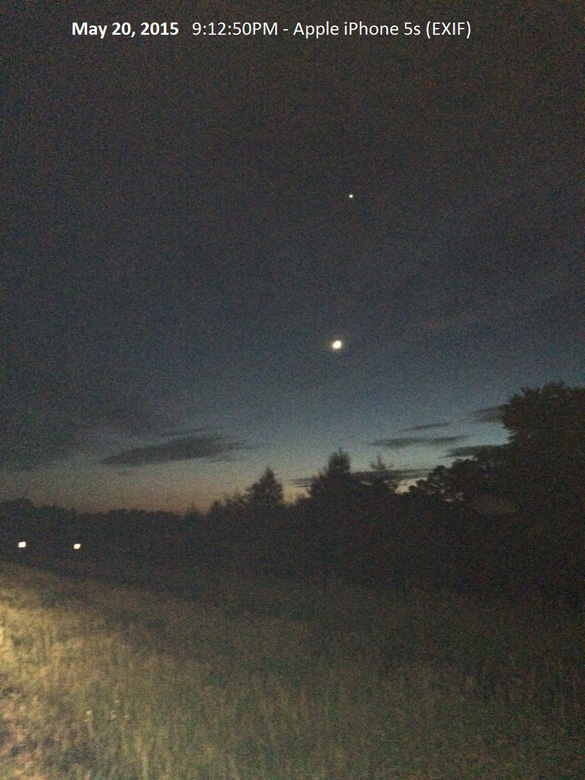 “When I arrived home I called the non emergency phone number for the Manassas Police Department and asked if anyone had reported strange or odd lights in the area. The woman on the phone said no, she had not receive any reports, but asked if I wanted a different number to call to report it and I think she said it was a MUFON number. I didn’t write it down as I started to feel stupid as if maybe my imagination just got carried away. I scrolled through the pictures on my phone but didn’t notice anything except the moon and north stars so I thought it was just my imagination so I went to bed.”

But the next day the witness checked the photos again. 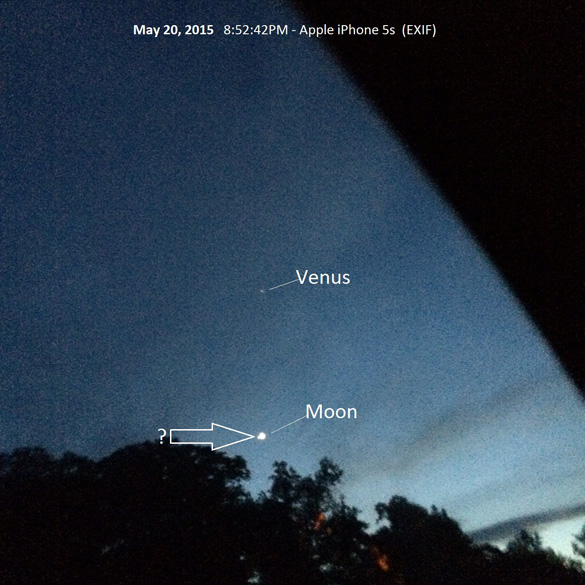 Witness image taken during the time of the sighting that does not show the object. (Credit: MUFON)

“I noticed in one picture I did actually get an object that is clearly not a plane, a star or the moon. The object is disc-shaped moving right to left and showing the reflective light on one side. The moon is clearly below it in the picture. The object was not in the picture before or after, just this one shot. I have debated about filing a report since the day I saw the image in the picture and have finally decided to tell what I saw.” 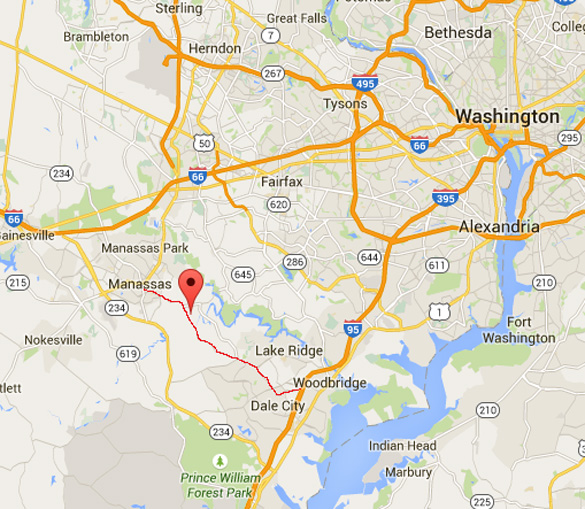 Manassas is an independent city in Virginia, population 37,821. Please remember that most UFO sightings can be explained as something natural or man-made. The above quotes were edited for clarity. Please report UFO activity to MUFON.com.