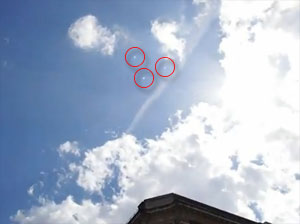 Videos have surfaced online that reportedly show multiple UFOs above London on the afternoon of Friday, June 24th. The UFOs in the videos are lights in the daytime sky that don’t have the appearance of traditional metal aircraft. These orbs are shown hovering in the sky, then zipping behind clouds, seemingly playing hide-and-seek with the camera. The Daily Mail explains, “As the camera is pointed upwards, over the BBC’s Yalding House, three white dots flash across the sky at great speed in a triangle formation, they are very quickly followed by two similar sized white dots.”

Two videos of these orb UFOs were uploaded to the Internet by YouTube user “alymc01.” He uploaded his first video on June 16th. The description accompanying this video explains that he had been “seeing these odd lights over Central London (BBC Radio 1 building) randomly for the past week,” and he finally managed to “get them on camera” on the evening of Wednesday, June 15th. According to The Telegraph, this video “is believed to have been shot from inside the offices of a visual effects company called The Mill,” a company that creates special effects for the film industry—a detail that certainly raises doubts regarding the authenticity of the alleged UFOs.

The second video uploaded by “alymc01” is creating an international buzz. The description provided with this video states, “Right – took over a week to get it….but finally managed to get these critters on camera on a clear day, and even get a close-up. It seems to be attracting quite a crowd now when they appear. Can anyone explain what on earth these lights are please?”

A response to this video was posted to YouTube by user “HOAXKiller1” to point out a flaw in the video—as one of the UFOs is passing behind a building, it is temporarily visible in front of the building, which led “HOAXKiller1” to conclude that “this object is clearly FAKE, and was made using computer generated graphics.” 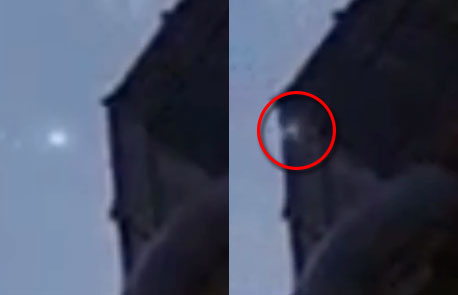 UFO passing behind a building, but is temporarily visible in front of the building. (credit: HOAXKiller1/alymc01)

Another issue with the UFOs in the video is that, at times, they appear to match the movements of the shaky camera—something that indicates less-than-perfect motion tracking by the video’s creator. This flaw was also noticed by “HOAXKiller1,” who states in the description of his video, “They didn’t ‘match move’ the UFO with enough precision to match the camera shake, so you can see it bouncing around.”

There are other videos from June 24th that appear to show the same orbs in the sky above London. But the veracity of these videos is also under scrutiny following the problems with the initial June 24th video uploaded by “alymc01.”

The UFOs in these videos remain unidentified. And while yet unconfirmed, the general consensus is that these videos are nothing more than a hoax.