Three UFOs zoomed through the sky during the NBC broadcast of the New Orleans Saints vs. Indianapolis Colts football game on October 23.

UFOs zooming through the sky during football game 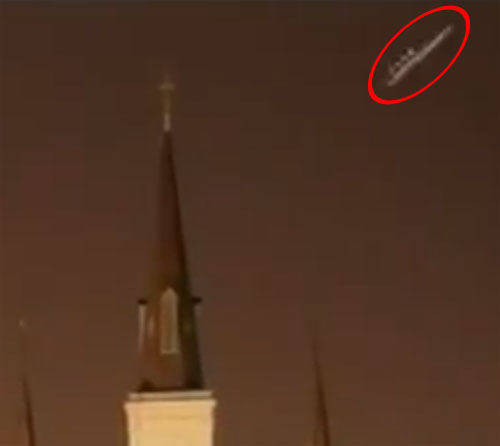 At the beginning of October, UFOs were captured on video flying in a V-formation above Kansas City Chiefs’ Arrowhead Stadium in Kansas City, Missouri. At least three UFOs zoomed through the sky during the NBC broadcast of the New Orleans Saints vs. Indianapolis Colts football game on October 23 in New Orleans.

Is this a sign of a pattern that could indicate that extraterrestrials have an interest in football? Probably not, considering the Missouri UFOs were identified as most likely being stunt planes performing training exercises. But the New Orleans UFOs are a bit more intriguing.

Following a commercial break, NBC’s camera focused on New Orleans’ St. Louis Cathedral. It is at this point that the first UFO zips through the sky. The next light appears approximately five seconds later, which is followed by the third light, another five seconds later.

Looking at the video frame-by-frame, these UFOs appear to be rod-shaped with multiple lights. Similar objects have been captured on video by filmmaker Jose Escamilla, who refers to them as “rods.” He reportedly has hundreds of videos showing this phenomenon. But some assert that these rods are nothing more than insects flying close to the camera’s lens. Marc D’Antonio, chief photo and video analyst for the Mutual UFO Network (MUFON) agrees. D’Antonio told the Huffington Post, “I think these are insects that got caught in that interlaced video as they’re flying through with a wing beat frequency, and the frames are being captured at a frequency . . . that causes that look.” 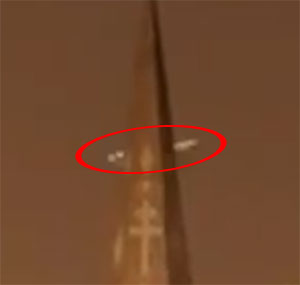 But in the case of the New Orleans video, as Lee Speigel of the Huffington Post points out, “one little frame of the video may be the one little problem that could rule out the insect theory.” Again, in frame-by-frame analysis of the video, the objects do appear to move behind the cathedral towers, indicating objects larger than mere insects. But through scrutinizing the video, it is also apparent that the video broadcast by NBC was a time-lapse video–video is captured at a lower frame rate, and when it’s played back at normal speed, it appears to be moving faster. You can tell this video is a time-lapse video by watching the clock hands on the cathedral clock moving very quickly, as well as the rapidly moving cars on the street.

Let’s put the puzzle pieces together. We have rod-shaped objects, each with multiple lights. These objects fly behind the cathedral towers indicating they are much larger than insects. And knowing that the video is a time-lapse video, the objects were originally moving much slower than they appear in the video. These details create the possibility that the UFOs in the New Orleans video were airplanes landing at one of the three airports within a 10 mile radius of the Saints’ stadium. But no official identification has been made.

Watch the NBC video below: