UFOs over Muskegon Lake in Michigan 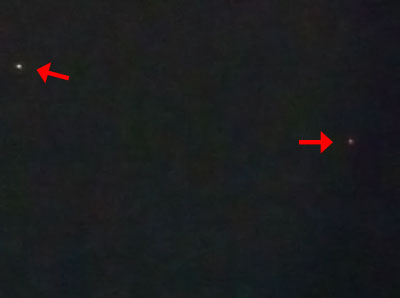 Multiple witnesses reportedly witnessed UFOs over Muskegon Lake in Michigan on the evening of Saturday, May 26.

According to The Muskegon Chronicle, witness Michael White photographed two lights over the lake at approximately 9:45 p.m. The two orange UFOs were seen hovering in the sky, and were completely silent. White described that he watched the objects moving, but then they “stopped and hovered then shot away at a extremely fast rate of speed.”

Another individual reportedly witnessed the lights in the sky, but only saw them hovering in the sky and slowly disappearing from sight.

The Muskegon Chronicle contacted local police and the United States Coast Guard. Neither the police nor the Coast Guard received any reports about these lights in the sky. But a Coast Guard Petty Officer Ronnie Mason explained to the Chronicle that UFOs around water are sometimes caused by “light reflecting off boats’ windshields during sunset, or lights on boats when it gets dark.” However, based on witness testimony related to this latest sighting, these UFOs have Mason “stumped.”