Home / Articles / Air Force officers reveal UFOs interested in Nukes
They believe their experiences demonstrate an interest by UFOs in our nuclear capabilities. 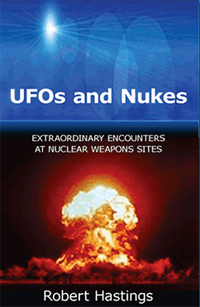 Today retired Air Force personnel, including an ex-base commander, are speaking at a press conference for the National Press Club in Washington D.C., sharing their experiences with UFOs while on duty at Air Force bases that housed nuclear weapons. They believe their experiences demonstrate an interest by UFOs in our nuclear capabilities.

In one case, presented by retired captain Robert Salas, 16 nuclear missiles became non-operational at Malmstrom Air Force base in Montana, while UFOs were reported outside the gates of the base. One security guard became so frightened by the approaching UFOs that he jumped a fence, injuring himself. The UFOs were reported as large red lights flying around and stationing themselves just outside the gate.

Another presenter at the conference is retired Colonel Charles Halt, who at the time was deputy base commander, when in 1980 UFOs were reported outside of his base in the UK. RAF Bentwaters was on lease to the US during the Cold War, and was just outside of a forest called Rendlesham were these events took place.

In the very early morning hours of December 26th lights were seen by security guards. Sergeant Penniston along with two other airmen went to check on the lights. They saw very bright objects in the forest that eventually flew into the air and departed at very high speeds. Sergeant Penniston reports that he was even able to touch the strange object. 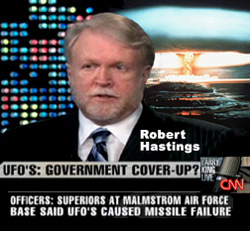 Having heard about this incident the next day, Col. Halt was skeptical that they saw anything unusual and believed that they had misinterpreted something mundane. That was until that night when more lights were seen in the forest. Halt himself led a group of men into the forest where they witnessed a bright glowing triangular object that also flew out in to the night at very high speeds. The sightings in the forest went on for a day or so longer. Although it was not common knowledge at the time, it was later confirmed that the U.S. was secretly storing nuclear arms at the base.

The press conference was organized by UFO researcher Robert Hastings. He has written a book titled UFOs and Nukes. Inspired by a UFO sighting of his own in 1967 at Malmstrom Air Force Base, Hastings has spent years gathering testimony and making the case that UFOs do seem to have an interest in nuclear sites.

Open Minds magazine has devoted its latest issue (Oct/Nov 2010) to UFO landings, and in particular to the Rendlesham forest incident. Open Minds Radio has also recently had Robert Salas, James Penniston, and Robert Hastings as guests to talk about their experiences. You can listen to those shows at the links below.