Home / Articles / UFO News / UFO streaks across the sky in Nebraska, South Dakota
Cameras at Lincoln Airport in Nebraska recorded a bright object streaking through the early morning sky on Wednesday, October 19 as it shot towards the earth.

UFO streaks across the sky in Nebraska, South Dakota 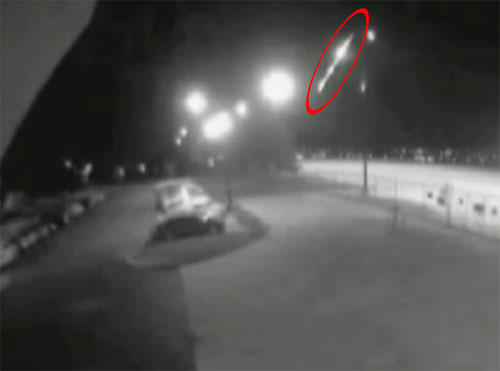 Cameras at Lincoln Airport in Nebraska recorded a bright object streaking through the early morning sky on Wednesday, October 19 as it shot towards the earth. Witnesses contacted the Lancaster County Sheriff’s Office to report the UFO. According to ABC News, deputies were dispatched six miles northwest of Lincoln, where the mysterious object was thought to have crashed down, but no debris or damage was located.

But a similar UFO was seen in Sioux Falls, South Dakota at the same time as the Lincoln UFO. So the two incidents are most likely one in the same. Sioux Falls is more than 200 miles north of Lincoln, so it’s not surprising that deputies from the Lancaster County Sheriff’s Office found no debris during their search.

Aberdeen News reports that law enforcement officials were also called by witnesses in Sioux Falls. One witness described that she was on her deck, and all of a sudden, “the deck lit up and an orange-and-blue object streaked off, leaving a trail of smoke behind.” She, like many other witnesses, was startled and unsure about what she observed.

Officers from the Sioux Falls Police Department also observed the streaking light in the sky.