Home / Articles / Remarkable UFO sighting in Northern Chile
This case is well documented, as it was reported to and investigated by the Chilean police (Carabineros) and seen by dozens of witnesses.

The world’s attention focused on Chile recently due to the extraordinary rescue of the 33 miners trapped in the copper mine of San José near Copiapó, which was broadcast live by all major news networks and received unprecedented international attention. There is no UFO angle to this story as far as I know, but it was a good excuse to look for interesting cases from northern Chile. The Atacama Desert region, where most of Chile’s copper mines are located, is the driest area in the world. Most of the population live in coastal cities and in a few mining towns. This region is also famous for its clear skies and it has become probably the world’s largest astronomical area. The U.S. and the European Southern Observatory (ESO) have built over the years a number of sophisticated observatories, including the Cerro Tololo Inter-American Observatory, and ESO’s Observatories in La Silla and a new one called Paranal, which ESO calls “the world’s most advanced visible-light astronomical observatory.” There is also a place in Atacama called Valle de la Luna (Valley of the Moon), where not a single drop of rain has fallen in hundreds of years. It is in this alien-looking terrain where NASA tested its Mars probes. 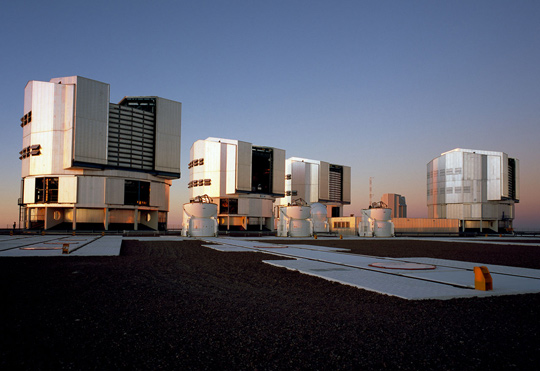 With all this celestial lore and incredible clear skies, it’s not surprising that Chile’s northern Atacama region is also rich in UFO sightings. I have many interesting cases in my files, including a couple of fighter jet scramble cases out of the Cerro Moreno Air Force Base in Antofagasta in the late 1970s, but for now I want to discuss a dramatic Close Encounter of the First Kind (CE-I), which occurred near the port of Tocopilla in the Antofagasta region on the night of September 23-24, 1971.

This case is well documented, as it was reported to and investigated by the Chilean police (Carabineros) and seen by dozens of witnesses. It is virtually unknown in the English UFO literature—the only source in English that I know of was an outline of the case I wrote for the paper, “A Historical Survey of UFO Cases in Chile,” published in the  MUFON 1987 International UFO Symposium Proceedings. Besides press accounts, I obtained long ago—courtesy of investigator Luis Riquelme of the Chilean UFO group Orion—a copy of a May 12, 1979 handwritten report signed by a retired police colonel, who was in active service at the time of the incident in 1971. Beginning around 10 p.m. on the night of September 23, a stationary light over the ocean was seen by numerous witnesses in Tocopilla. One of them, who saw the object with binoculars, described it as artificially constructed, with intermittent lights and round windows like a ship’s porthole.

One of the witnesses quoted in the press at the time was the reporter Daniel Cavieres from the Tocopilla newspaper La Prensa. In an interview with the Santiago newspaper Las Ultimas Noticias, Cavieres said that, “around 22 hours [10 p.m.] on Thursday, I was surprised to see off the coast of Tocopilla something that seemed to be a stationary ship with lots of lights. Normally, when ships navigate on the high seas they only use the officially required lights, which are not many. But in this case there was an abundance of lights, which triggered my curiosity. Moreover, I noticed green and red lights which blinked intermittently.” The reporter looked at the object with binoculars and noticed what seemed like portholes and a cabin. Although puzzled, he assumed it was just a ship, not a UFO. Other witnesses, however, thought otherwise. Patricia Miranda, a 15-year old student, immediately alerted her family, yelling when she first saw the object in the sea near Tocopilla, “Look! A flying saucer!”

That was just the beginning. At 1:30 a.m. on September 24, two different truck drivers traveling from Antofagasta to Tocopilla came across a brightly lit object hovering on the coast. The truck drivers rushed to the nearest police station in Tocopilla. Though skeptical at first, a police van with a sergeant and two corporals was dispatched to “KM 33,” the site where the trucks had stopped to look at the UFO. The carabineros confirmed the UFO immediately and kept it under constant watch until 5:30 a.m.; they reported by radio its maneuvers to the Tocopilla “comisería” (police station). A report of the event was filed later with the Carabineros Northern Headquarters in Antofagasta and a copy of it was obtained by Las Ultimas Noticias. The police report informed:

“It was possible to confirm that at more or less 2 km. [1.24 miles] from the coast, such artifact remained totally lit, changing places at great speed…later on it came close to the beach of Caleta Buena…. At a distance of 150 meters [492 feet], it could be seen that the object had an approximate diameter of 20 meters [66 feet], with a helicopter-like cabin totally lit and with sections like windows. It was approximately 30 meters [98 feet] above the sea level, being impossible to identify its origin.” 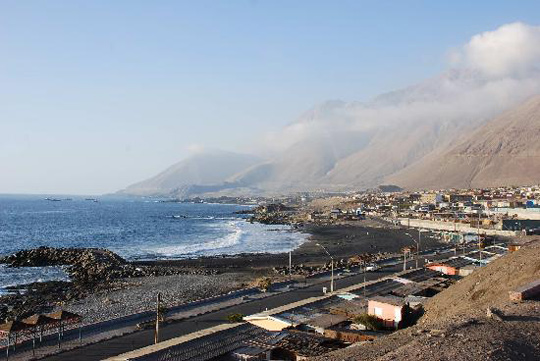 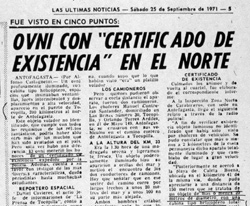 Sept. 25, 1971 article from Las Ultimas Noticias, “The UFO with ‘Birth Certificate’ in the North.”

The colonel’s handwritten report to Orion, dated May 12, 1979, goes into still further details. The colonel reveals, for instance, that the sergeant walked towards the cliff armed with a rifle. “When he arrived to the place where he couldn’t advance further (the edge of the cliff), the sergeant yelled toward the sea; not obtaining a response he made a series of shots towards the luminous object,” states this second police report. “Suddenly, this object moved extremely fast in the direction of the rocky cliff, arriving at a distance no more than 50 meters [164 feet] from the place where the police were.” At that point, continues the report, “the whole area became illuminated like at daytime.” The document quoted also the description of one of the corporals, according to which the UFO was “a sort of rectangular building with many windows that could be seen clearly but with no one inside….” The UFO then passed over the van and continued towards the mountains, where it “remained suspended in the air, throwing a light beam once in a while which would illuminate the area.” 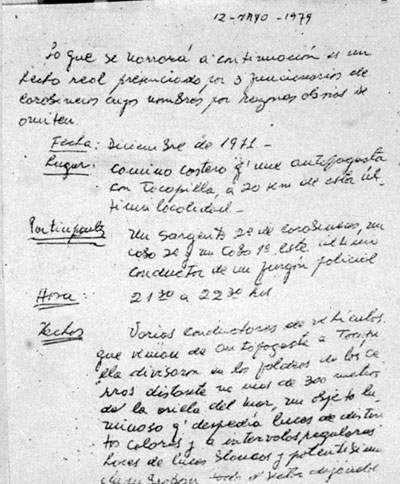 First page of the May 12, 1979 handwritten report by retired police colonel to the UFO group Orion. (image credit: Huneeus Collection/Orion)

Eventually, the UFO returned to the sea where, around 6:10 a.m., it was seen and reported by radio by Manuel Malatesta, captain of the fishing vessel “Martín Pescador.” The ship was some 20 miles from the coast between Antofagasta and Iquique, when “a red ball” flew around it for several minutes. The ship’s owners, Guanaye Fishing Co., even issued a press release about the sighting. After the evolutions over the ship, stated the communiqué, “the unidentified body sank in the sea at a distance of more or less three miles from the ship. The phenomenon was observed by the entire crew.” 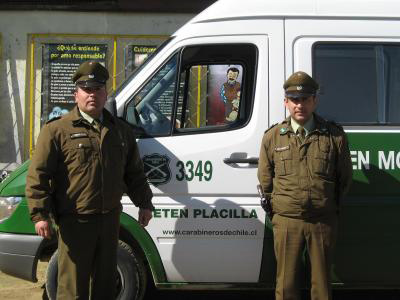 This CE-1 is undoubtedly one of the best UFO sightings from Chile. The object was observed continuously by many geographically-independent witnesses for a period of about 8 hours. The closest observations were made by three policemen. The colonel added also in his report to Orion that neither of the policemen had consumed a drop of alcohol. The case remained unsolved and it was appropriately titled by the Santiago newspaper Las Ultimas Noticias, “The OVNI [UFO] with a ‘Birth Certificate’ in the North,” because it was officially confirmed by the police. While most of the observations pointed to the object flying or hovering in the air, the final description by the fishermen indicates that the object went into the ocean, thus becoming a true USO.