Home / Articles / UFO News / UFO reports up in 2012
Sighting reports submitted to the Mutual UFO Network (MUFON) in the first week of 2012 could indicate a busy year for UFOs. 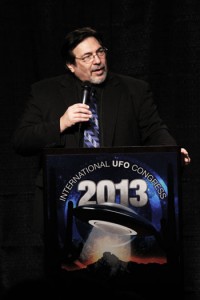 According to Lee Speigel of the Huffington Post, 2012 has already seen an increase in UFO activity. MUFON international director Clifford Clift told Speigel, “For the entire month of January 2011, MUFON recorded around 500 reports, and we’re already up to 233 after just the first week of 2012.”

MUFON reported increased UFO sightings in the late summer of 2011. Sightings in August 2011 doubled the number of sightings reported during other months. And if the first week of 2012 is any indication, this year’s sighting reports could double the number of reports received in 2011. Clift explained to Speigel, “Last year, we averaged over 6,000 total sightings, and if it continues at this pace, we’ll be up 50 percent, with about 10 percent of those reports ending up as unexplained after our investigation.”

Both Lee Speigel and Clifford Clift will be speakers this year at the 2012 International UFO Congress. More information is available at the UFO Congress website.