Home / Featured / UFO over Brooklyn on 4th of July?

UFO over Brooklyn on 4th of July?

A couple in Brooklyn, New York noticed a UFO in the sky during the 4th of July fireworks display. 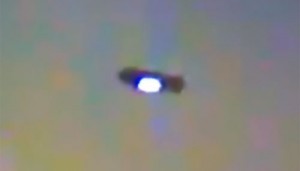 The witness and his girlfriend were watching a live stream of the fireworks on their TV, provided by the EarthCam network of live streaming webcams. And at approximately 9:20 p.m., they noticed “something strange” floating in the sky. He rewound the stream to see the mysterious object again. He recorded the footage with a video camera while narrating the details of the sighting. He explains, “The camera’s going to pan left, and when it does, there’s something floating beside the building, and it damn well looks like a UFO.” He uploaded his video to YouTube with the following description:

Well me and my girl was watching live streams again trying to watch the fireworks over Brooklyn when the cam moved left and we spotted something that looks like a UFO. The thing sits there for 24 sec with out even moving and looks like it’s less then 50 feet from the building.

The witness states that “you can almost make out the shape of a disc” when the UFO appears on the screen. But what he saw floating over Brooklyn was most likely far less exciting than an alien spacecraft. The most probable identification for this UFO is a terrestrial airship. Navigation lights are visible on the craft, and the shape of the object is that of a traditional blimp. Further, the DIRECTV blimp was in the area on July 4 to cover both the fireworks and the 2013 Nathan’s Hot Dog Eating Contest. Several aerial photos were posted to the DIRECTV blimp’s Twitter account, like this one: 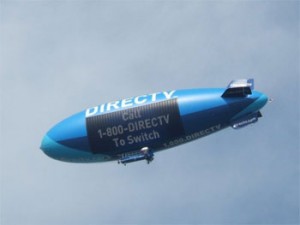 A large illuminated area is visible on the object in the video, and this is a further indication that the UFO is the DIRECTV blimp. The DIRECTV blimp is a Video Lightsign Lightship, operated by The Lightship Group, and is equipped with a large video screen capable of displaying full color video images.

American UFO sighting reports tend to increase on the 4th of July primarily because substantially more eyes are staring into the sky while watching fireworks. Although some truly mysterious objects are occasionally observed on this U.S. holiday, many of the UFOs can eventually be identified.