Home / Articles / UFO News / UFO flies behind British politician on live TV
Viewers of Channel 4 News in London were surprised on August 16th when they observed a UFO zooming through the sky in the background during an interview. 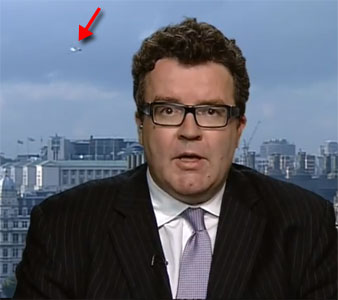 Viewers of Channel 4 News in London were surprised on August 16th when they observed a UFO zooming through the sky in the background during an interview with British politician Tom Watson. According to the Metro, viewers called the television station to report the strange object that “appeared at the top of the screen, before darting downwards in a flash.”

The UFO is only visible for a couple of seconds, and it is difficult to make out any physical details of the object. An airplane or helicopter have been suggested as possibilities, but the movement demonstrated by the UFO in the video makes these explanations seem unlikely. A seagull or another bird gliding through the London sky could be the identity of the object in question, but that is simply speculation.

The UFO remains unidentified, and will likely remain so. One factor that makes identifying this particular UFO challenging is that the Channel 4 interview was most likely shot in front of a green screen, with the London video backdrop digitally added to the video, meaning that the London scene with the UFO zooming through the frame was pre-recorded. Unless the television station knows exactly when the London scene was recorded, the option of contacting local air traffic controllers to see if there was an aircraft in the sky at that particular time does not exist.

But, again, the object in this video is most likely a bird, and it is unlikely that authorities will investigate the incident.