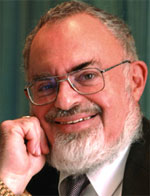 As reported last week, UFO expert Stanton Friedman will be going to Saudi Arabia at the end of this week to speak on an extraterrestrial-themed panel at the fifth annual Global Competitiveness Forum. The nuclear physicist will be part of a panel entitled “Contact: Learning from Outer Space,” and Friedman intends to “stress that aliens have taken innovative approaches to interstellar travel, travel in the atmosphere (and in) examination of earthlings.”

Friedman will be joined on the panel by Michio Kaku, professor of theoretical physics at City University of New York; Zaghloul El Naggar, an Egyptian scholar and a member of the Supreme Council of Islamic Affairs; Nick Pope, formerly of Britain’s Ministry of Defence; and Jacques Vallee, astronomer and general partner at SBV Venture Partners. According to Friedman, he is “the only one of the five who has strongly stated a conviction that some UFOs are of alien origin. The others indicate that something of interest is happening, but they are unwilling to admit to the conclusion that aliens are visiting, as opposed to merely being out there.”

Friedman will also be appearing at the 20th anniversary of the International UFO Conference in February.