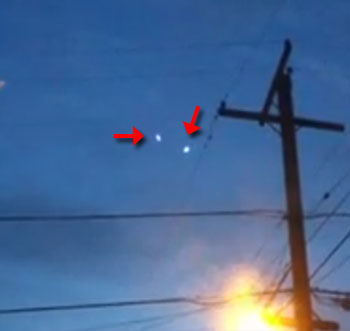 Two orb UFOs were recently recorded on video in the sky over Missouri. The Epoch Times provides this description of the video: “The brightly glowing objects are traveling low in the evening sky. They fly around each other, appearing to almost collide, before descending in the distance and disappearing behind some trees.”

A husband and wife witnessed the glowing UFOs together, and the wife recorded the incident on her iPhone. The husband then submitted a report of their sighting to MUFON (the Mutual UFO Network), which included the video. The video has since been uploaded to YouTube, along with the following description from the husband that was submitted with his MUFON sighting report:

“My wife witnessed 2 glowing orbs in the sky while she was driving down our street on SE Sherrett St. She has an incredible video that she shot from her iPhone, through her windshield. The lights spun around each other and then descended to the ground where they then went behind some trees and out of view. She is very reluctant to share this experience, so I am writing this for her. The video is 34 seconds long, and it is incredible.”

The Epoch Times points out that there have been several UFO sightings reported in Missouri recently. And according to data assembled and interpreted by Alejandro Rojas of Open Minds, Missouri is ranked fifth in the top ten UFO hotspots in the United States.