TV personality Ben Hansen witnessed a UFO flying above Huntington Beach, California on the night of Friday, May 3. 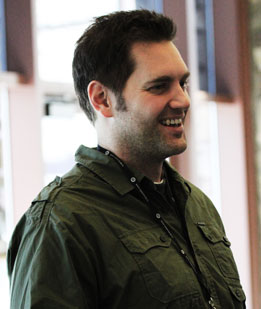 Hansen, known best for his role as host and lead investigator on the SyFy channel’s show Fact or Faked: Paranormal Files, was exercising with a friend at a local Huntington Beach high school. Hansen finished running around the school’s track, and while he waited for his friend to finish her laps around the track, he looked up and noticed a “triangular shaped object traveling at a very quick pace” in the northwestern sky.

According to the UFO sighting report published on his website, Hansen describes the object as a defined craft in the shape of a “near perfect equilateral triangle” with large white spheres at each corner. As the object passed silently overhead, Hansen ruled out the possibility that the UFO was a flock of birds. And the object was unlikely a conventional plane because “there were no position marker, navigation, strobe, landing, beacon, or other lights visible.” Hansen also ruled out the possibility that it was something like three weather balloons attached to a frame because, by his calculations, the craft was traveling somewhere between 500-800 mph.

When his friend finally joined him, Hansen learned that she too saw the UFO. Before discussing the sighting, Hansen told her to write down what she saw first to avoid contaminating each other’s memories. She only saw the object for a few seconds before it disappeared from view, and her perspective was different from Hansen’s. And therefore, her description varies slightly from Hansen’s. She describes: 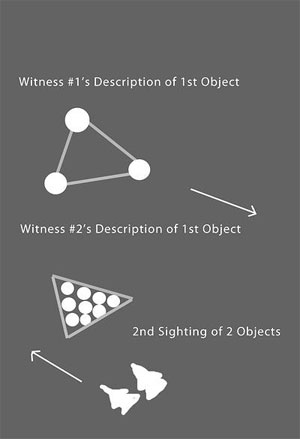 Illustration of the UFOs based on witness testimony. (Credit: Ben Hansen)

It was in the formation of a triangle, but it seemed to have several objects that were forming that triangle. It wasn’t very high, definitely not a plane, it was not illuminated. Initially I thought it might be a flock of birds, but it was a triangle shape not a V shape and the objects were much bigger than birds and it would have taken several birds to make the triangle as big as it was. It was almost as if they looked like Styrofoam Dixie cups clustered inside the triangle.

The differences in the witnesses’ descriptions is illustrated in a drawing included with the sighting report.

Shortly after this sighting, the witnesses saw two more UFOs returning along the same path as the first UFO. Although these objects were silent like the first UFO, these craft were different in appearance. Hansen describes that, “lacking a better way to describe them, they appeared to . . . have the shape of fighter jets, but they were completely white in color and flying in such tight formation that they were almost touching each other.” Also like the first UFO, no lights were visible on these craft.

In addition to posting his sighting report on his website, Hansen also submitted the report to the National UFO Reporting Center and the Mutual UFO Network. This former FBI agent is a trained investigator, and it shows in his report, which is considerably more thorough than most UFO sighting reports.

Spacing Out! interviewed Ben about his sighting and you can watch that interview below: