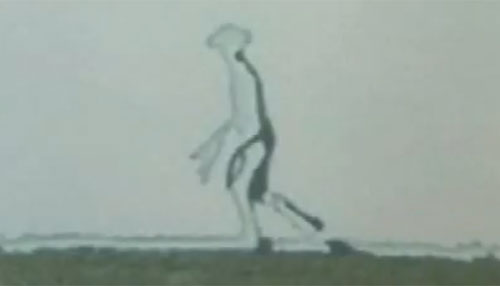 Translucent alien appears in photo, according to UFO group

A recently released photo shows what some believe is a translucent, or perhaps transparent, extraterrestrial. 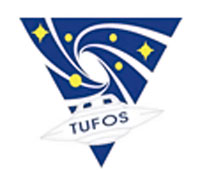 The photo was reportedly taken by Chen Yung-huang, a police officer, near Jiaming Lake in Taitung County, Taiwan on May 14, 2012. The International Business Times reports that this photo was released by the Taiwan UFOlogy Society (TUFOS) on December 22, 2012, and has “sparked debate between skeptics and believers.”

The photo was allegedly taken using an iPhone 4 camera. The photographer reportedly claims his intent was to snap a landscape photo, but after reviewing the photo later, he noticed the odd figure in the distance. He then gave the photo to TUFOS for examination. When zoomed in, the anomaly in this photo appears to be some sort of sci-fi creature that is part human, part frog, and part insect. The International Business Times describes this strange figure:

The photo shows a human-like figure, seemingly walking uphill with hands hanging just below waist level. The unusual shape of the figure’s head brings to mind the silhouette of Princess Leia from the Star Wars saga. The odd shape of the creature’s hands is like the shadow of snorkeling fins or Spiderman’s open palms. The whole human-like image seems semi-transparent or transparent, with double lines shaping the image from neck to leg. 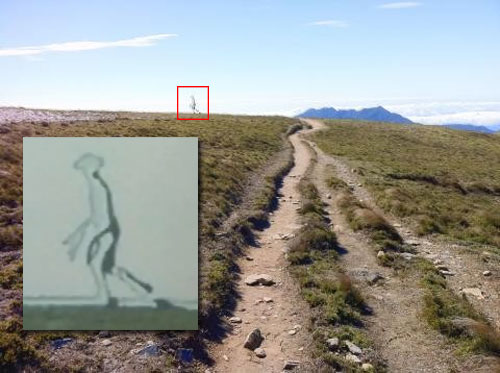 Photo taken by Chen Yung-huang and released by The Taiwan UFOlogy Society. The zoomed area shows the anomaly in question. (Credit: TUFOS)

According to the Taipei Times, TUFOS has had experts on mobile phone technology, computer imagery, and camera photography inspecting the photo. But no conclusive findings have been reported.

Some experts suggest the unidentified object in the photo is the result of a superimposed image. Zooming in on the figure in question reveals double-exposure lines at its bottom. Photo expert Chien Jung-tai says it is possible that a “shaking motion when the shot was being taken might have produced the double lines in what might be a leftover image.” But he finds it interesting that these double lines only appear in a small section of the photo. The Taipei Times goes on to explain that Chien also compared the pixels of the double lines to the area above the double lines, and he concluded that “they do not differ much,” which leads him to believe that “it does not appear to be an edited photo.”

What do you think? Is the strange object in this photo the result of double exposure or some other photographic glitch? Or does this photo show a potentially extraterrestrial life form? Share your thoughts with us in the comment section below, or leave a comment on our Facebook page.