Titan may have huge ocean 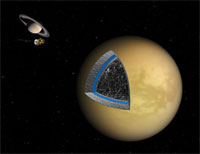 A new study suggests that Saturn’s moon Titan may have a huge ocean of liquid water beneath its surface. The data behind the study was provided by NASA’s Cassini space probe. This new study isn’t the first to suggest an underground ocean on Titan, but as Space.com points out, “[I]t adds another line of evidence in support of this supposition, which could make the intriguing moon a likelier candidate to support life as we know it.”

Rose-Marie Baland of the Royal Observatory of Belgium in Brussels is the lead author of the new study. Previous studies found that “Titan’s tilt and moment of inertia don’t make much sense if the moon is a completely solid body — but that the numbers could work out if the moon has an underground ocean.”

Baland and her colleagues used the information from previous studies to launch their research, which led to the team’s conclusion that “Titan’s orbital behavior indeed makes sense if the moon is assumed to have a solid interior surrounded by a liquid-water ocean, which itself sits beneath an icy ‘shell.'”

The results of the study will be reported by Baland and her team in an upcoming issue of the journal Astronomy & Astrophysics.