Here’s a first–A dating company is developing a smartphone application that could help Earthlings find love among the stars. 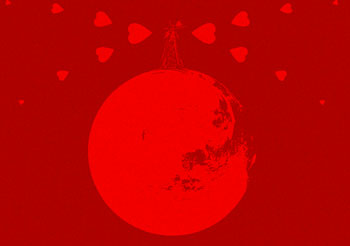 LocalSin describes itself as a “social network that uses location technology to help you find hookups around you.” The company may need to modify its description to read, “. . . find hookups around the galaxy . . .” if it successfully completes its plan. According to the Metro, LocalSin is working on an allegedly NASA-inspired app that will enable love-seekers to transmit radio signals from Earth to other planets. According to a LocalSin spokesperson, “It will give normal, broadminded people the opportunity to communicate with other life forms, and could open the doors to true universal dating.”

The company describes their project as an “intergalactic dating application,” but “intergalactic” may be overstating a bit. It seems that the radio signals will be confined to the Milky Way galaxy. According to the Metro, “Transmissions could reach as far as Jupiter’s moon Europa and Saturn’s moon Enceladus, both of which scientists claim could support potential life.”

Beaming messages into space is precisely what theoretical physicist Stephen Hawking has been cautioning humans against for the past couple years, but it appears that LocalSin either didn’t get that memo, or they don’t think his warning applies to space love letters.

The app is reportedly planned to be offered for free, but development of the app could take five years to complete.

One thing is certain–the term “long-distance relationship” will take on new meaning if the company succeeds in developing their galactic love app.

So, for all of you waiting to try your luck in a much larger dating pool, this app could be your solution. But interplanetary love seems like it would be a lot of work. Even if you have your own spaceship ready to blast off, it takes roughly seven months to reach Mars. And, with a company like LocalSin that specializes in one-night stands, a Martian hookup would equate to a fourteen-month stand.