As the 13th anniversary of the famous “Phoenix Lights” approaches, I find myself revisiting my own experience observing the lights back in 1997.

Growing up, I lived in the wide-open desert, known as Phoenix’s far-west valley. My family’s house was technically located within the city limits of Buckeye, Arizona, but we lived in a sparsely populated region of Buckeye called Rainbow Valley that was several miles removed from the actual “city” of Buckeye. Needless to say, on our 1.25 acres of desert land, the view of the night sky was always breathtaking. Away from Phoenix’s light pollution, every single star in the sky was always vibrantly visible.

At the time, I was an artistic 17-year-old who loved to videotape everything. I always had my parents’ Sony Digital 8 camcorder in my hand, shooting anything and everything I thought was interesting. The night of March 13th, 1997 was no different. I was sitting on the front porch when I noticed several bright, motionless lights in the sky, almost directly overhead. They were all in a line, slightly curved, and white in color. 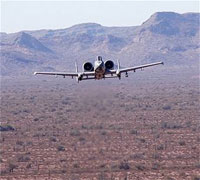 I was used to seeing all sorts of objects in the sky, including frequent military aircraft from Luke Air Force Base and the Barry M. Goldwater Range. It was quite clear to me that these lights were not military craft (not publicly-known military craft, that is). I was also used to seeing flares in the night sky, dropped by A-10s out at the Goldwater Range. These lights were not flares.

Intrigued by these lights, I began recording them with the video camera. I cannot recall how long I watched the lights, but at the time, it seemed like the lights remained overhead for a long duration of time. I kept recording until I lost interest.

I remember going inside to watch TV, and being surprised at how every news station was mentioning the strange lights. I also remember watching the awkwardly bizarre press conference on TV that then Governor Fife Symington delivered to address the flood of inquiries his office received from witnesses who wanted an explanation. He put on a public show to make light of the incident, but, both before and after this press conference, Symington voiced his personal feelings that the lights were from an alien spacecraft.

It was a unique experience, observing the UFO phenomenon being taken (somewhat) seriously by the local media and government officials.

So where is the footage of the Phoenix Lights I managed to record with my parents’ video camera? I have absolutely no clue. I am sure it was thrown into the sea of video tapes I had back then, and most likely, the contents were recorded over multiple times with soccer games, high school graduations, and family vacations.

At the time, I certainly did not think much of the incident, but now, I consider myself lucky to have been among the thousands who witnessed the Phoenix Lights.

To celebrate the 13th anniversary of the Phoenix Lights, the Harkins Shea 14 Theatre in Scottsdale, AZ will be screening Dr. Lynne Kitei’s documentary about the lights on March 14th at 1 PM and 4 PM. Dr. Kitei will be present to introduce the movie, and her newly expanded Phoenix Lights book.