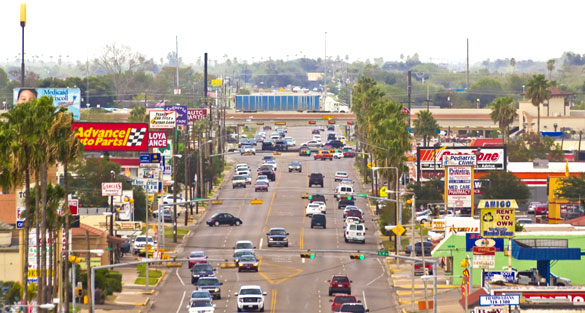 A Texas witness at Edinburg reported watching a triangle-shaped UFO with “circle-like” neon lights at each of the three points that hovered momentarily and moved quickly away, according to testimony in Case 73039 from the Mutual UFO Network (MUFON) witness reporting database. 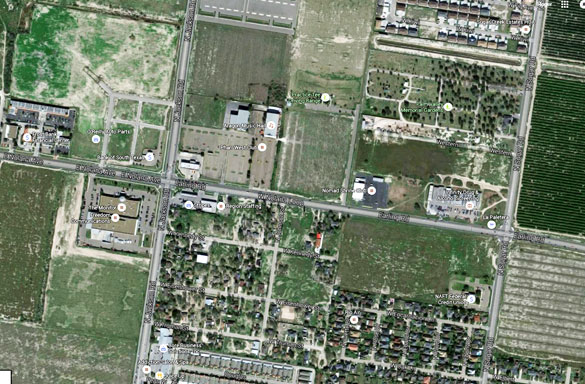 The Nolana Loop area near Edinburg where the witness reports first seeing the triangle-shaped UFO on December 7, 2015. (Credit: Google)

The reporting witness was in Edinburg “off Nolana Loop” near a friend’s home when the incident occurred on December 7, 2015.

“We had got in our trucks to go pickup my enclosed trailer at another friend’s house,” the witness stated.“While leaving the neighborhood a teenager at the end of the street stopped my friend’s truck and pointed up in the southern direction.”

The witness said that people in a truck in front of him also began to look up to where the teen was pointing.

“I rolled down my truck window and watched also. The object was traveling south to north and appeared to be climbing in altitude.”

“It appeared to have three circles in a triangle shape emitting an orange light from each circlelike bright neon light. The night sky was very clear and the shape of the object appeared to be a triangle or V-shaped. It traveled faster than a jet, but slower than a falling star. Its path was straight.” 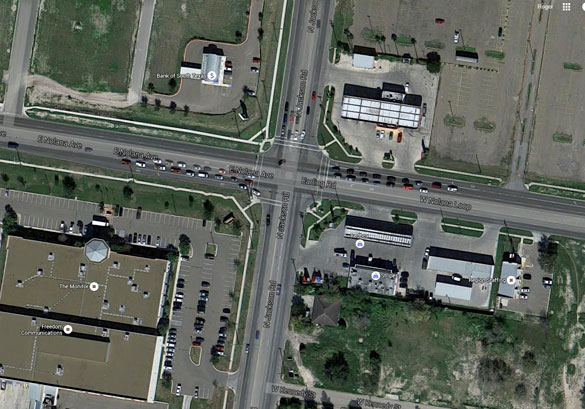 The witness said there were three ‘circle-like’ lights at each corner of the triangle shape emitting orange light. Pictured: The Nolana Loop area near Edinburg. (Credit: Google)

“As it seemed to pass almost directly above us,it paused, maybe for five seconds. The three circles on the underbelly of the craft became very bright and seemed to make a bright swirling burst. It instantly was gone.”

The witness stated that this is the first sighting of an object that he could not be explained.

“I live in and have grown up not far from NASA Mission Control and Ellington AFB. We see jets and helicopters all the time. This sighting is nothing like anything I have ever seen. Both of my friends also saw exactly the same thing and it has left all of asking what we saw. The only feeling I remember feeling was amazement at what we were seeing.”

Texas MUFON is investigating. No images or videos were included with the case, which was reported on December 10, 2015. 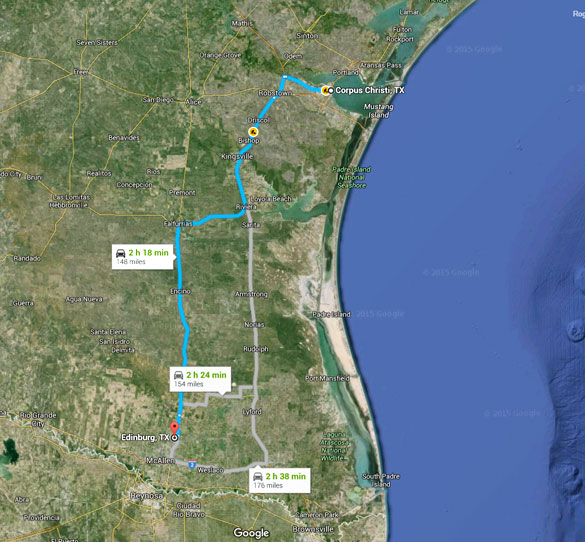 Edinburg is about 150 southwest of Corpus Christi, Texas. (Credit: Google)

Edinburg is a city in and the county seat of Hidalgo County, Texas, population 81,029. Please remember that most UFO sightings can be explained as something natural or man-made. The above quotes were edited for clarity. Please report UFO activity to MUFON.com.