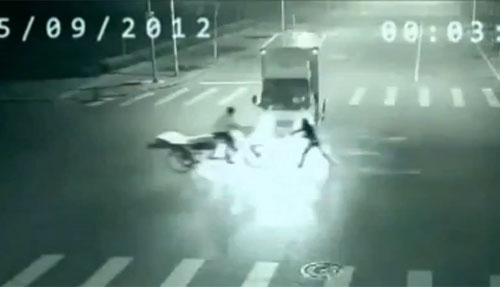 Supposed security camera footage recorded in China on September 5 shows a person on a bike rescued by an unidentified hero who teleports the individual and the bike out of the way of an oncoming truck.

This video generated a mild buzz after it was uploaded to YouTube. Many viewers immediately postulated that the hero in this video was an extraterrestrial with superpowers. Others speculated that the video was a hoax manufactured by a creative CGI artist. But it appears that this “security camera footage” belongs to a collection of marketing videos for Chinese video game Zhu Xian 2. 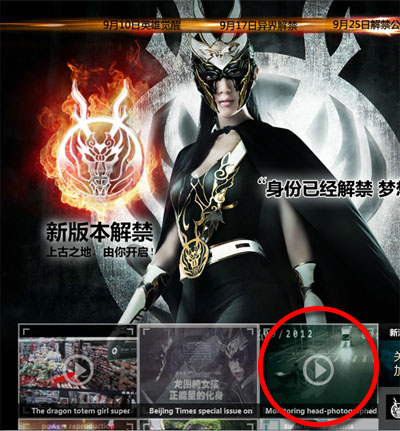 Zhu Xian 2 is an online video game based on a popular Chinese internet novel called Zhu Xian, and was created by China-based entertainment company Perfect World–a company specializing in massively multiplayer online role-playing games (MMORPGs). Gaming site OnRPG explains that Zhu Xian 2 is the prequel to Zhu Xian (known as Jade Dynasty in the U.S.)–a game in which characters are “descendants of gods who once ruled over the world.”

The “security camera footage” video is featured on a microsite for what appears to be a real-life representation of a character from this video game. She is referred to on the site as the “dragon totem girl.” The illustrated version of this character is on the game’s official website.

Although many people are just discovering the presence of this video on the “dragon totem girl” website, some have already suggested Perfect World is, for some reason, involved in a conspiracy to downplay this video and pass off what some assert is proof of a genuine super-powered extraterrestrial as nothing more than marketing material. What do you think? Share your opinion with us in the comment section below, or on our Facebook page.

——
***Thanks to Ryan Wa for bringing the video game to my attention.