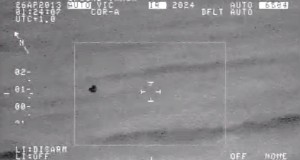 Open Minds UFO Radio: Larry has been into UFOs for decades, and has had his own amazing sighting. After he retired from a career as a computer programmer, he decided to put his skills to use as a UFO investigator.

END_OF_DOCUMENT_TOKEN_TO_BE_REPLACED

Open Minds UFO Radio: On April 25, 2013, during a routine flight of a U.S. Customs and Border Protection (CBP) DHC-8 Turboprop aircraft in Puerto Rico, the crew spotted an unusual object. They caught the object on their thermal imaging system as it flew in from the ocean, over Rafael Hernandez Airport, then back out into the ocean. The crew did not know what it was they caught on video.