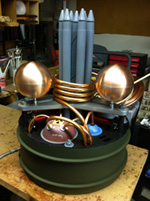 Special effects legend, Doug Trumbull, is releasing a high tech 10 minute movie that is a fictionalized version of his personal goal to film a UFO. The film is being shot in 4k 3D at 120FPS (Frames Per Second), that compares to The Hobbit, filmed with 2k 3D at 48 FPS, and James Cameron’s next project which is set to be at 60FPS. In layman’s terms, the higher the numbers, the better the picture resolution. In fact, Trumbull says this movie is like looking through a window. More like reality than a movie.

The movie and the UFO project are called UFOTOG, a combination of the words UFO and photography. Trumbull owns an ex-military hummer that is kitted out with some high tech video equipment for the express purpose of taping a UFO. The movie is about a man using this sort of equipment to film a UFO.

According to The Hollywood Reporter, this is one of two feature films Trumbull is working on, he says, “It is not the primary one that I want to make next. I’m also developing a sci-fi epic that takes place about 200 years in the future”.

For more details about UFOTOG, we interviewed Mark D’Antonio. D’Antonio is the photo analyst for the Mutual UFO Network. He also owns a company called FX models, which works with the entertainment industry, the military, and others to build detailed technical models. D’Antonio works closely with Trumbull on his movie and UFO projects.

Trumbull’s UFOTOG movie is set to be released in August. Only a limited number of theaters have the technology to project the movie, but we will keep you up to date on the details once the movie is released. So keep checking back with OpenMinds.tv for updates.