Home / Articles / South Park Colorado’s “Little Buddy” UFO
South Park in Colorado is an area made famous by the cartoon of the same name, but few know about its UFO legacy and the lights seen in the sky referred to by locals as “Little Buddy.” 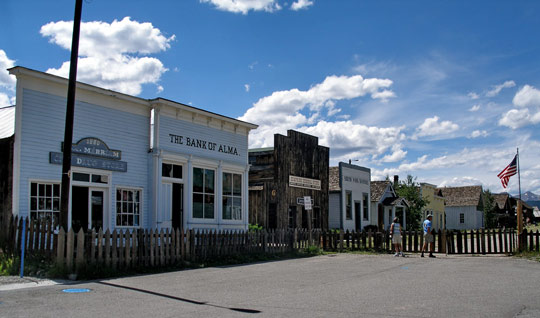 South Park in Colorado is an area made famous by the cartoon of the same name, but few know about its UFO legacy and the lights seen in the sky referred to by locals as “Little Buddy.”

If you take the scenic route through the mountains from Denver to the San Luis Valley, you will pass through Park County, home to three large mountain valleys, South Park, Middle Park, and North Park. There is no longer a town named South Park, but in Fairplay, the largest town in the county, there is a re-creation of an 1880’s town called South Park City.

One of the creators of the cartoon grew up in a town 40 miles towards Denver along this route. The town in the cartoon most resembles Fairplay, where you can find stores selling South Park cartoon trinkets.

Denver City Buzz Examiner, Richard Blake, used to work for the Park County Republican and Fairplay Flume newspapers, in one of his Examiner columns he mentions covering UFO sightings in the area in the late 70’s and early 80’s. He writes,

It seemed like just about everyone in town had seen UFOs at one time or another.  A lot of folks had developed theories as to why the UFOs were present in such numbers.  One of the most common was that the large deposits of uranium in the area were of interest to extraterrestrials.  One area just north of Fairplay, known as Reinecker Ridge, was the scene of enough UFO sightings that many locals supposed the area must house some sort of UFO base. 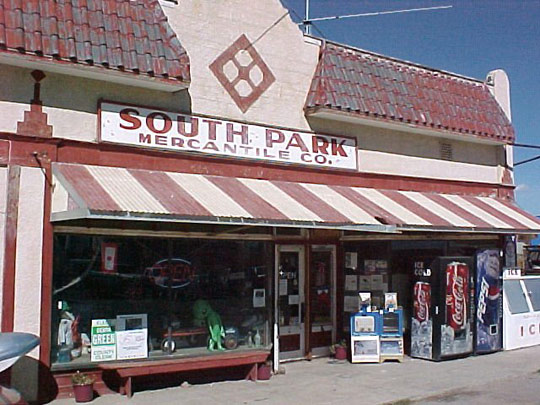 I first heard about the South Park UFOs from my friend Rick Nelson, who holds a monthly meeting featuring various lecturers called the Paranormal Research Forum. He was told that there were so many sightings that there is a store in the town of Hartsel called The South Park Mercantile that sells UFO merchandise. 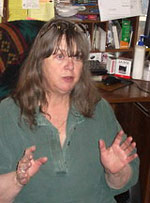 Rick and I decided to go find out more. He called the store’s owner, Suzie Jones, who arranged for UFO witnesses in the area to be on hand to let us video tape some interviews. We brought along a South Park cartoon enthusiast, Chuck Zukowski, who also happens to be a paranormal investigator in Colorado Springs, which was the direction the UFOs were seen. We also brought our friend Sarah Daniels, who has an interest in the subject and wanted to help out.

On a beautiful Saturday in May 2007, we headed to Hartsel. I was surprised to find a whole array of South Park UFO merchandise, including T-shirts, hats, mugs, etc. Although she was a little camera shy, the store’s proprietor, Jones, was very accommodating. She says the locals refer to the UFO as “Little Buddy” and will come in to tell her about the latest “Little Buddy” sightings. Several locals came to tell us their stories which were all fairly similar. They reported seeing lights usually to the east and slightly north towards Cheyenne Mountain, which looms over Colorado Springs. Until recently this mountain was the headquarters of Air Force Space Command and still houses an underground complex partially used for the monitoring of space.

Witnesses said the objects were usually bright points of light that would sit in one place for hours on end, and then eventually zoom off at high speeds. Some people reported only seeing the UFO once while others reported seeing them quite often and on a regular basis. One gentleman said he would often see them in the warmer parts of the year when he was out enjoying his hot tub at night. 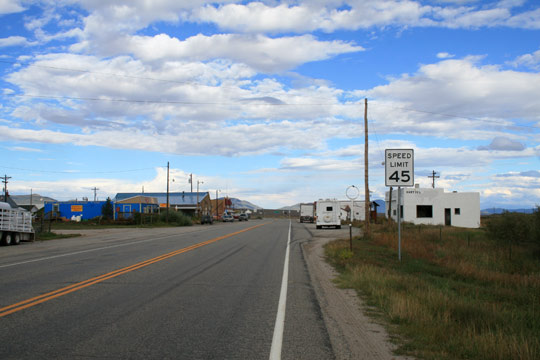 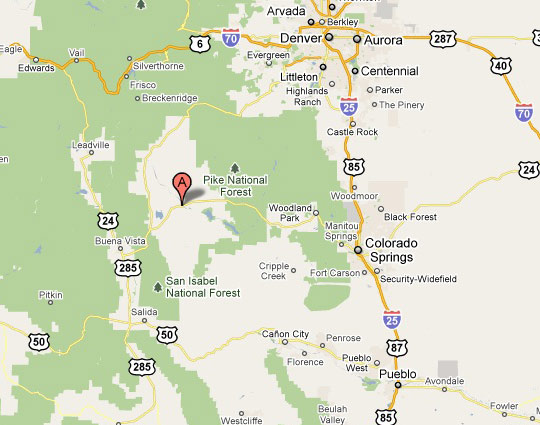 A Google map of the area. Hartsel is marked by the red marker.

A few guys, who were spending a day out fishing, came in to restock on beer. They had obviously gone through quite few cold ones up until this point. While shopping they asked what we were up to, a couple of them were shocked that others had seen UFOs because they had also seen “Little Buddy”. The more impatient members of their party waited outside wondering what the heck this was all about.

Along with the fishermen, we spoke to around 7 or 8 witnesses. We were impressed that a town which boasts a population of 677 people would have so many UFO witnesses willing to share their stories. 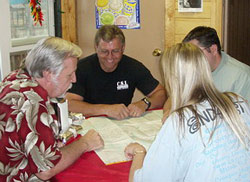 That night we set up cameras to try to get a glimpse of “Little Buddy” ourselves. The night skies in the high Rocky Mountain planes are spectacular, with or without UFOs. Unfortunately, this evening we were without. We did notice how the valley is a bit raised giving a very distant panoramic view. There sure was a lot of sky to see. Satellites and shooting stars were very visible, but we didn’t see any reason why people might mistake these for something paranormal. Hoping for an extraordinary experience of our own that evening, it was easy to imagine just how incredible a UFO encounter would be in the crystal clear skies above us.

After reviewing the Mutual UFO Networks (MUFON) reporting database, it does not appear there are an abnormal amount of sightings reported in the South Park area, although people out there might not know that MUFON exists, and they seem much more prone to report their sightings to Suzie Jones. Zukowski, who was also a MUFON investigator in Colorado Springs at the time, says he was unable to find an inordinate amount of sightings reported on the west side of Cheyenne Mountain towards South Park. However, with the mountain being around 50 miles away, their “Little Buddy” could just be closer than they had estimated. 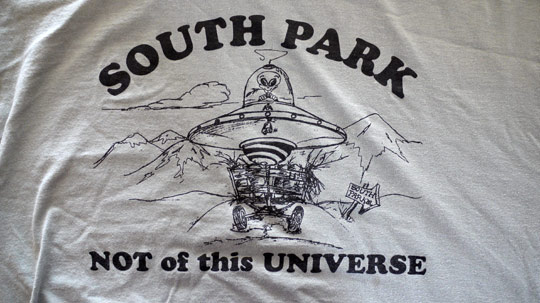 As a Colorado native and a UFO investigator who has lectured on UFOs and Colorado, it was surprising for me to find a small town with a UFO history that seemed virtually unknown outside of South Park, even though they had T-shirts. I now own one of those T-shirts, to help spread the word, although no one has ever asked me what the T-shirt was all about, they just figure it is another one of my weird UFO shirts.

I wonder if there are other towns out there with their own secret UFO history. If you happen to know of such a place, email me and let me know, we would love to share their story with the rest of the world and maybe even help them out with their T-shirt sales.