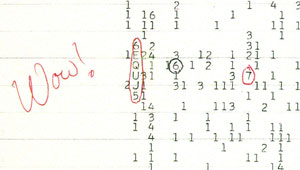 The 62nd International Astronautical Convention recently took place at the International Convention Centre in Cape Town, South Africa. Seti League executive director emeritus Paul Shuch participated in the convention, and spoke about searching for radio signals from extraterrestrial civilizations. In doing so, the topic of the “Wow!” signal came up.

The “Wow!” signal was a radio signal detected by Dr. Jerry Ehman on August 15, 1977 with Ohio State University’s Big Ear radio telescope. This signal, named after Ehman’s reaction, was “so strong that it catapulted the Big Ear’s recording device off the chart,” according to the Big Ear’s website.

The “Wow!” signal has never been detected again. Shuch described it as “one of those things that goes bump in the night and then is gone forever.” The Cape Times explains that the signal “bore all the hallmarks, at the time of its detection, of having a non-Earth origin.”

But after 34 years of silence, Shuch speculates that intelligent life is probably rare in the universe. At the conference, he explained, “When Seti science first started, in the early 1960s, we optimistically assumed this would be a short duration project and show immediate success . . . It’s taken us this half a century to come to the conclusion that it’s not going to be so easy. Civilisations are more rare, more elusive.”

This, of course, is based purely on the lack of detected radio signals, and assumes that all extraterrestrial civilizations are broadcasting radio signals . . .