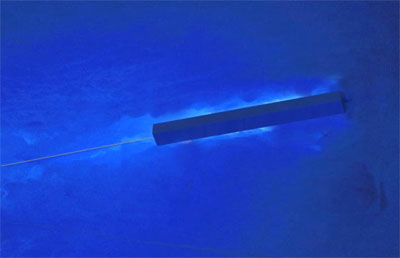 IceMole drilling through a glacier in Switzerland. (Credit: FH Aachen)

Scientists have evidence suggesting the presence of water below the surfaces of several planets and moons. And the presence of water is the primary component scientists look for when searching for extraterrestrial life. Saturn’s moon Enceladus is one of these alien worlds where water has been detected, and it is also the target of researchers who want to search for signs of extraterrestrial life in its water.

Scientists led by the German Aerospace Center are developing a probe to melt and drill beneath the icy crust of Enceladus to search for alien life in the water that is thought to be below the moon’s surface. Researchers have named this probe IceMole, and as Space.com explains, “After IceMole reaches its target — a cryovolcanic crevasse filled with water it is hoped — it aims to sample the liquid, examining it for evidence of microbes.”

This exploration project, called the Enceladus Explorer, or EnEx, launched on February 22, but testing of the IceMole is already underway here on Earth. It has successfully been used to drill into glaciers in Switzerland, and researchers plan to conduct additional testing during the next couple years in Alaska and Antarctica.

According to Oliver Funke, project manager for the Enceladus Explorer at the German Aerospace Center, “EnEx deals with one of the most exciting tasks of space exploration — the search for extraterrestrial life.” Funke also stated that, if EnEx goes well, an IceMole mission to explore the polar ice caps on Mars will be proposed.