Home / Articles / UFO News / Saturn moon may have salty ocean
Scientists believe that one of Saturn's moons might have a salty ocean beneath its icy shell.

Saturn moon may have salty ocean

Scientists believe that one of Saturn’s moons might have a salty ocean beneath its icy shell.

A team of scientists used the Cassini space probe’s Cosmic Dust Analyzer to examine plumes of water spouting from geysers on Saturn’s icy moon Enceladus. Particles were collected by Cassini during three flybys. And the team’s analysis showed the particles closer to the moon’s surface have a high salt concentration. 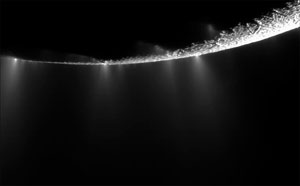 Previous studies found low amounts of salt in particles that make up Saturn’s rings. But by sampling the geysers directly, researchers were able to find that “more than 99 percent of the ice around the geysers is salt-rich,” according to Space.com.

This new study suggests that the reservoirs that feed the moon’s geysers connect to a larger ocean approximately fifty miles underground.

Frank Postberg of the University of Heidelberg, who led the study, pointed out to Space.com that an underground ocean on Enceladus could be a target for locating extraterrestrial life. Space.com summarized Postberg’s explanation:

[U]nlike other unseen oceans in the solar system, the water on Enceladus is fairly easy to reach. Jupiter’s moon Europa, for instance, could have an ocean under a layer of ice, but retrieving it would require significant effort. By contrast, the geysers on Enceladus pull material — and potentially life, should it exist there — from its ocean and shoot it into space.

The research was published in the June 22nd online edition of the journal Nature.