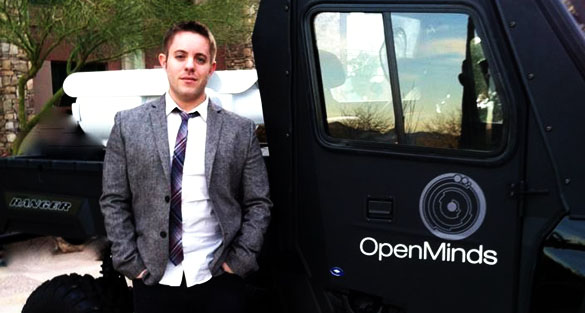 Ryan Sprague – A Human Approach to an Alien Phenomenon – November 21, 2016

Open Minds UFO Radio: Ryan Sprague is a professional playwright & screenwriter in New York City. He is also an investigative journalist specializing in the topic of UFOs. He has written for numerous publications, including Open Minds Magazine, Phenomena Magazine, and UFO Truth Magazine. Speaking on the UFO topic, he has been featured on ABC News, Fox News, The Travel Channel, and The Science Channel. He is also the co-host for both the Into the Fray & UFOmodPOD podcasts. His first book, Somewhere in the Skies: A Human Approach to an Alien Phenomenon, is now available via Richard Dolan Press.

Ordinary people are seeing extraordinary things in our skies. And while reports of UFOs and their possible occupants are littered with dates, times, and descriptions, they rarely focus on those who’ve actually experienced them. How have these dramatic and often traumatic events affected those involved? Could both the positive and negative implications, whether subtle or revelatory, further our knowledge of what exactly these phenomena represent? Through extremely detailed testimony from highly credible witnesses, including pilots and military personnel, and insight from those in the psychological, academic, and scientific fields, Somewhere in the Skies: A Human Approach to an Alien Phenomenon, is a personal journey that also weaves together a story of stories, furiously pumping new blood into the heart of these mysteries, one inextricable experience at a time.

For more about Ryan visit: SomewhereInTheSkies.com