Home / Articles / Roswell main street UFO military convoy
The convoy consisted of one large 18 wheeler “low boy” flatbed tractor-trailer which was escorted by U.S. Army Jeeps both in front and behind. 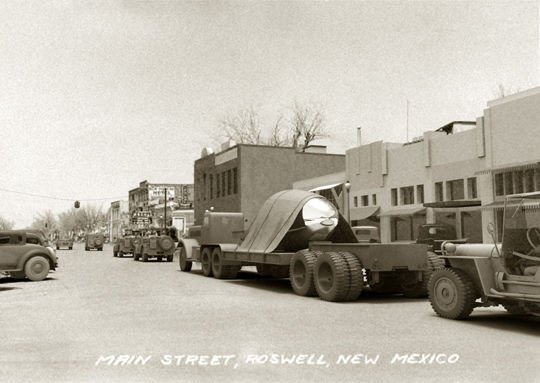 Illustration based off of witness testimony by John MacNeill.

Sometime in early July of 1947, Richard Talbert (Roswell Daily Record paperboy) witnessed a large military convoy head south down Main Street. Closely examining the time-line of events as laid out in the book Witness to Roswell indicate that this occurred during the late afternoon of July 8. The convoy consisted of one large 18 wheeler “low boy” flatbed tractor-trailer which was escorted by U.S. Army Jeeps both in front and behind. The Jeeps carried a contingent of MP’s carrying machine guns. Talbert was able to see that the low boy had an unusual seamless oval silver colored “egg shaped” object on top which was covered by a tarp. The mysterious object measured approximately four feet wide, by twelve feet long, and seven feet high. Talbert also recalled that the object had a dome on top, which was damaged or partially cut off. Bob Rich, (another local paper boy) also witnessed the strange convoy pass “right through the center of town” (4th and Main Street). The convoy was seen heading in the direction of hangar P-3 building 84 on base. 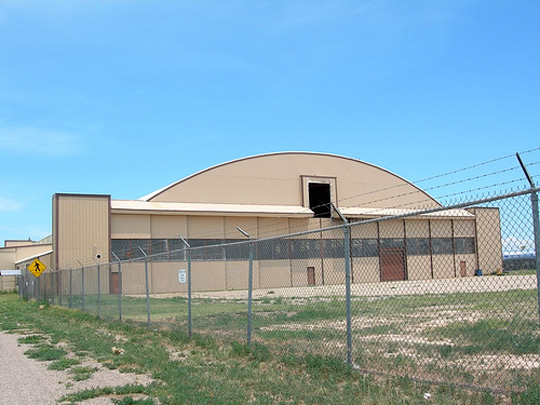 The convoy was also confirmed by Paul McFerrin who was walking down Main Street with friends. Further south, Jobie MacPherson spotted the vehicles approaching from the north, and heading right past him in the direction of the base. He recalled seeing the pod-shaped craft, and various mangled pieces of metallic debris sticking out from beneath the tarp. Once the convoy arrived on base, the strange egg-shaped craft was seen in hangar P-3 building 84 by Lieutenant Walter Haut (Public Information Officer of the 509th Bomb Group). He described it as being twelve to fifteen feet in length, not quite as wide, and about six feet high. The surface appeared metallic, with no evidence of windows, portholes, wings, tail section, or landing gear. 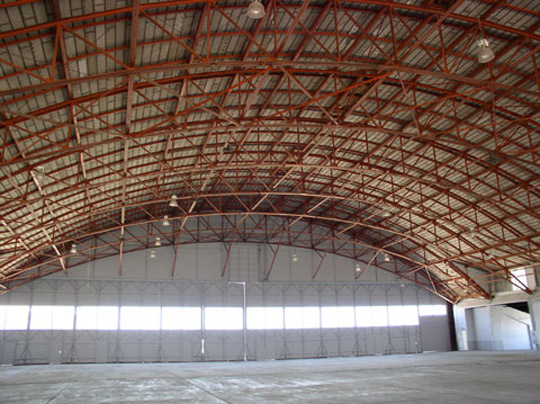 Another crucial witness who observed the military convoy was staff sergeant Earl Fulford. He maintained a Top Secret security clearance with the 603 Air Engineering squadron at Roswell Army Air Field. Completing his shift around 4:00 p.m., Fulford and a friend began walking back to his car which was parked across the street from hangar P-3. Shortly thereafter, Fulford witnessed a large tractor-trailer heading in his direction. He then noticed that it was pulling a low-boy trailer with something covered by a tarp that was “about the size and shape of a Volkswagen beetle”. Fulford recognized the driver as being his good friend George Houck who was a reclamation specialist. His expertise was in the recovery of wreckage. This might include damaged aircraft, cars, trucks, equipment, or whatever needed to be hauled back to the base. When asked by Fulford what was under the tarp, Houck exclaimed “I can’t tell you that”. Then, Houck put the tractor in gear, and drove into hangar P-3. Roswell researchers Tom Carey and Don Schmitt located 86 year old George Houck in 2005. He initially stated that he could not recall his old friend Earl Fulford, but later stated that he did remember him. Continuing the phone interview with Carey and Schmitt, Houck became evasive. He later claimed that he could not remember the events relating to the low-boy trailer, and the tarp covered object. In a final attempt to obtain some definitive answers, Fulford was asked if he would personally call Houck to see if this might help refresh his memory. He originally claimed not to know Fulford, then before hanging up, Houck made the following cryptic remark: “some things should not be discussed, sergeant”.

Roswell skeptics would do well to ask the following questions: If what was recovered was only a “weather balloon” as originally claimed by the United States government, why the need for an armed military escort? Also, what was the mysterious object which was concealed by a tarp on the low-boy trailer and confirmed by at least five eyewitnesses? Certainly, the remains of a simple weather balloon would fit within the back payload section of a standard Army Jeep. In addition, why in 2005, was George Houck still unwilling to comment on the events of July 8, 1947? Until additional officers stationed at RAAF come forward with new details, the mysterious object transported by George Houck will remain classified.

You can read more about the Roswell mystery and related stories here: Roswell UFO