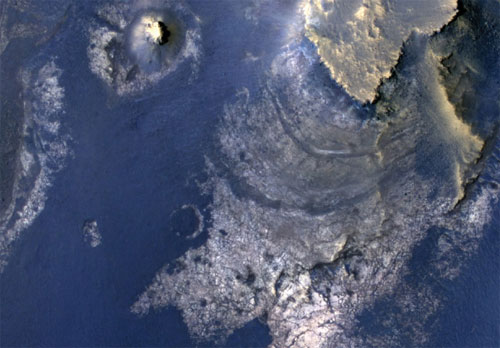 Probe finds ‘strongest evidence yet’ of extraterrestrial life on Mars

On Sunday, January 20, officials announced that data from NASA’s Mars Reconnaissance Orbiter (MRO) and ESA’s Mars Express spacecraft provides evidence of a wet underground environment, and clues that suggest a groundwater-fed lake could have existed in McLaughlin Crater–a crater fifty-seven miles in diameter and 1.4 miles deep. 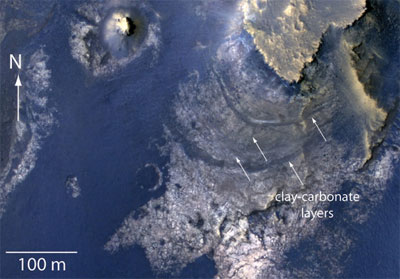 Locations of minerals and clays in McLaughlin Crater where a groundwater lake may have existed in the ancient past. (Credit: NASA/JPL-Caltech/Univ. of Arizona)

As RedOrbit.com explains, researchers suspect a lake inside McLaughlin Crater would have been fed by groundwater because “McLaughlin lacks large inflow channels, and small channels originating within the crater wall end near a level that could have marked the surface of a lake.” Spectrometer data collected by MRO indicates that flat, layered rocks in the crater contain carbonate and clay minerals, suggesting the presence of water. Joseph Michalski, the research paper’s lead author, believes “it is likely the carbonate formed within a lake-style environment rather than being carried into McLaughlin Crater from an external source.”

According to the Daily Mail, Michalski feels that “All the ingredients were there for life, but only small single-cell organisms could have survived in those conditions.” Still, the new data is exciting, and Michalski optimistically stated, “But I would now be more surprised if there was never any life on Mars than I would be if we did one day discover that simple life lived in that environment. And if life existed then, there is a chance it could still exist now.”

Researchers believe this is the “strongest evidence yet” that Mars may have supported life.

The team’s research results were published in the online edition of the journal Nature Geoscience.