Footage recorded by NASA’s Stereo spacecraft on December 1 shows Mercury being hit by a wave of electrically charged material emitted from from the sun, known as a coronal mass ejection (CME). But what has people talking about the video is a strange object near Mercury that is revealed by the CME blast. 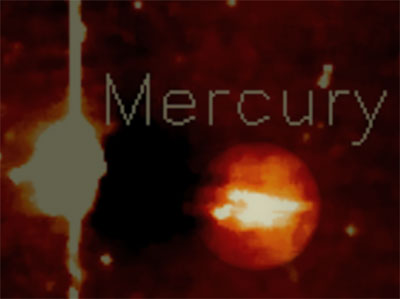 Some believe the CME blast revealed a cloaked UFO near the planet, but to get an “official” answer, MSNBC contacted scientists in the solar physics branch at the United States Naval Research Laboratory (NRL) who are responsible for analyzing data from the telescope camera that shot the December 1 footage. MSNBC reports that, according to Russ Howard, head scientist of the NRL group, and Nathan Rich, lead ground systems engineer, “it is simply an artifact left over from the way raw HI-1 telescope data gets processed.”

The image processing is explained in detail by MSNBC:

To make the relatively faint glow of a coronal mass ejection stand out against the bright glare of space — caused by interplanetary dust and the stellar/galactic background — the NRL scientists must remove as much background light as possible. They explained that they determine what light is background light, and thus can be subtracted out, by calculating the average amount of light that entered each camera pixel on the day of the CME event and on the previous day. Light appearing in the pixels on both days is considered to be background light and is removed from the footage of the CME. The remaining light is then enhanced.

Rich further explained, “When (this averaging process) is done between the previous day and the current day and there is a feature like a planet, this introduces dark (negative) artifacts in the background where the planet was on the previous day, which then show up as bright areas in the enhanced image.”

According to Gizmodo, this particular video shows a 24 hour period captured on December 1, and consists of 36 frames in total. The strange object was also recorded by Stereo’s twin satellite HI-2.

NASA and other scientists have used ghost images and image glitches to explain mysterious objects in space videos before. And that could certainly be the case with these new videos. But, as Gizmodo asks, “[I]f it’s a ghost image, why does it end so abruptly? How is it so well delimited? Why does it look like a spaceship?”

What do you think? Cloaked spaceship or a result of image processing?