Witnesses in Phoenix, Arizona and surrounding areas observed a bright UFO on the evening of Monday, September 2.

AZCentral.com reports that 3TV received dozens of calls about the UFO over Phoenix. And at least three witnesses filed sighting reports with the Mutual UFO Network (MUFON). One witness describes: 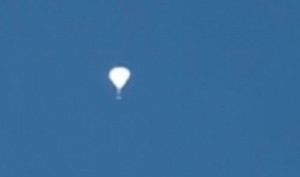 The light was so bright it looked like I was looking at the light from a welding torch. It first looked like the planet Venus, then it got brighter and bigger. I noticed it started to move along a path. I ended up at Tumble Weed Park in Chandler and got out of my car. I looked up due North and saw that it had moved and it was now closer to Tumble Weed Park but the elevation was higher. It then hovered for about 5 minutes. Then it started to turn orange then in a minute it turned Bright Red. Then, it turned back to the original bright white light and started to ascend up so high that it finaly looked like a very distant star. It vanished right after.

Another witness reported seeing three bright motionless lights in the sky. The witness describes, “Est. time stationary was 5-7min. The object hovered then slowly just dissipated, but did not move . . . From what I could see, the lights made a triangle pattern, and vaguely you could see what looked to be some sort of wings coming from the side of the object.” A similar report filed with MUFON describes:

Just before sundown I saw a relatively large light in the north sky. Too big for a star 5X the size of a star. I got my binoculars and saw it was made up of three balls. One on the bottom and two on top with a small space between the top two spheres. It didn’t move for 15 min. Then it started backing off and turning gold to yellow. Then it got smaller and smaller until it was gone.

According to AZCentral.com, the North American Aerospace Defense Command said no surveillance balloons were being tracked in the area. Further, the United States Strategic Air Command could not determine the source of the balloon. The National Weather Service received several calls about the UFO. A spokesperson confirmed the object was not a National Weather Service balloon. But this spokesperson suggested the possibility that the UFO was a high-altitude balloon from White Sands Missile Range in New Mexico.

After investigating the mystery, AZCentral.com concluded that the object was a research balloon from NASA’s Columbia Scientific Balloon Facility in Texas, which is managed by New Mexico State University. And the Phoenix National Weather Service confirmed this by posting the following message on Twitter:

Update on the Phoenix #balloon: Came from NM. Track it here: http://t.co/nuBG6Rr0Hd

AZCentral.com explains that the two ton, teardrop-shaped balloon was launched from Fort Sumner in New Mexico at 9 a.m. on Monday, September 2.

The balloon had a volume of 11.2 million cubic feet and was more than 300 feet across at its largest point. This massive balloon reached a height of 120,000 feet above sea level, and it eventually landed west of Phoenix early Tuesday morning. The balloon’s payload included student-designed instruments that were being tested at high altitudes.

More flights will reportedly take place in the near future.