40 years ago today, on October 11, 1973, Charles Hickson and Calvin Parker, Jr., say they encountered a UFO with strange creatures that took them aboard and examined them. Their story made headlines at the time, and while Hickson took every opportunity to share details of the encounter, in a recent and rare interview, Parker says he did everything he could to avoid publicity.

Their strange experience took place off of a pier at the Shaupeter Shipyard in Pascagoula, Mississippi. While fishing off of the pier, the two men heard a buzzing noise behind them. When they turned to look they saw a large egg-shaped object hovering 40 feet above the river. They described the object as 30 feet long and 8 feet high with blue lights on the front.

Sketch of one of the Pascagoula aliens made by Jim Flynt a week after the incident. (image credit: UFO contact at Pascagoula)

A door opened on the front of the craft and three creatures floated out of the craft towards them. In an article written soon after in The Mississippi Press, Hickson recalled, “the beings had legs but did not use them. They were about 5-feet-tall, had bullet-shaped heads without necks, slits for mouths, and where their noses or ears would be, they had thin, conical objects sticking out, like carrots from a snowman’s head. They had no eyes, grey, wrinkled skin, round feet, and claw-like hands.”

Hickson says he was paralyzed. In an AP interview with Parker posted today, Parker says Hickson told him to pretend he was passed out to try and avoid their attention, so he did. Apparently, the rouse did not work. They were both taken on board the craft and examined by a “mechanical eye.” The two men were then returned to the pier unharmed.

Parker says the UFO then took off so quickly that it shattered the windows in his car.

Confused and not knowing what to do, they decided to go to the police. The deputies at the Jackson County Sherriff’s Department were initially skeptical of Hickson and Parker’s extraordinary tale.  However, they say the two stuck to their story.

In attempt to trick the two men, the police left a voice activated tape recorder in the room when they left. However, what they heard on the tape later confirmed to them that the men really believed they had experienced something that had frightened them.

On the tape, Hickson tells Parker, “It scared me to death too, son. You can’t get over it in a lifetime. Jesus Christ have mercy.”

Glenn Ryder, who was a Captain at the Jackson Country Sherriff’s Department at the time, told the AP, “I don’t know what happened to them. I wasn’t there with them, but I know you don’t fake fear, and they were fearful. They were fearful.”

The story hit the news attracting interest far and wide. Both were given polygraph tests and passed, but despite this skeptics claimed the incident was a hoax. 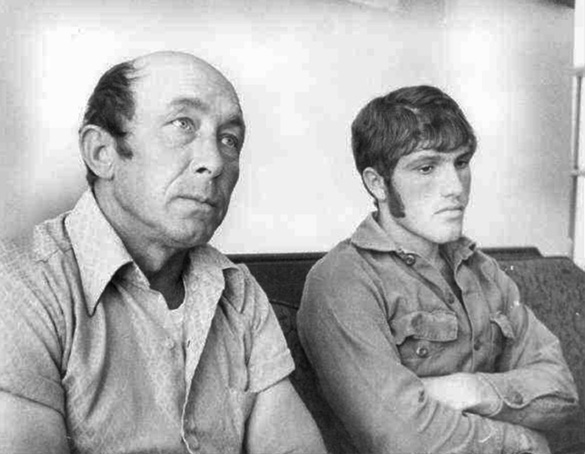 Hickson went on to write a book on the incident, gave lectures and interviews, and even appeared on talk shows. Parker wanted none of it. He says he would move from town to town to shy away from notoriety. If a place he worked found out about his encounter, he would quit and move on to a different job.

He told the AP he still doesn’t know exactly what happened that night. He speculates the creatures might not have even been aliens, but could have been demons. He says, “I’m a firm believer in God and where there’s good, there’s bad.”

Parker says he is pursued by UFO investigators and reporters to talk about his story even to this day, but he always declined. That is, until the AP story posted today.

Hickson passed away on September 9, 2011 in Ocean Springs, Mississippi, at the age of 80. You can read more here.