Home / Articles / UFO News / NRL comments on UFO orbiting the Sun
A strange object is in a recent NASA photograph, and some believe it is a UFO harvesting energy from the Sun.

A strange object is in a recent NASA photograph, and some believe it is a UFO harvesting energy from the Sun. 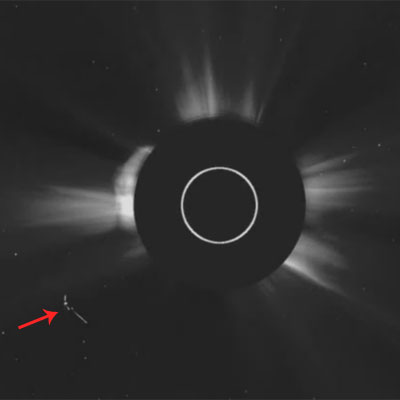 The photograph in question was taken on Tuesday, April 24 by a camera on NASA’s Solar and Heliospheric Observatory (SOHO). The object in the photo looks like a spaceship with a long arm extending from its body.

The solar physics branch at the United States Naval Research Laboratory (NRL) analyzes data from the camera aboard SOHO. Fox News asked the NRL about the photo. Nathan Rich, lead ground systems engineer in the NRL’s solar physics branch responded, stating the object in the photo is nothing but a glitch caused by cosmic rays.

This object looks quite different from other alleged UFOs in NASA photos in that it appears to be a very well-defined object. How can an object so well-defined be a simple camera glitch? Fox News explains:

In the image in question, a burst of cosmic rays happen to hit the camera lens at just the right angles to create the form of a hinged spaceship. The “boom arm,” angled at a slant across the rows and columns of pixels, was formed by a cosmic ray streaking through the camera sensor diagonally and at a shallow angle, depositing charge in several pixels along a diagonal line.

According to Life’s Little Mysteries, Rich surprisingly added, “The streaks in question are consistent with energetic particle (proton) impacts on the CCD, something which is apparent in just about every image.” With these glitches appearing in “just about every image,” it is surprising that there are not substantially more claims of UFOs in NASA photos. But Rich examines these photos for a living, so he probably knows what he is talking about.

What do you think? Camera glitch, or spacecraft? Share your thoughts with us on the Open Minds Facebook page.