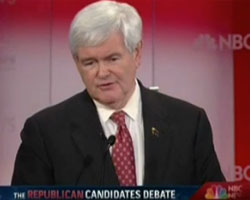 Space travel, space exploration, and the search for extraterrestrial life were hot topics in 2011, and these topics will be discussed even more in 2012. Current space exploration projects, planned missions, private space companies, and the emergence of the space tourism industry are all contributing to the new space race, as countries around the world are pushing to put more people in space and on celestial bodies.

The space topic was brought up at the recent 2012 Republican Candidates Debate in Florida. When asked about the space race, Newt Gingrich stated that he would like to see the U.S. go back to the Moon permanently, implying the colonization of the Moon, and he thinks a priority should be “getting to Mars as soon as possible.” He also shared his opinion that “building a series of space stations and developing commercial space” is something the U.S. should do.

Mitt Romney also stated that space travel should be a priority for the country.

Watch the video below to see both Romney and Gingrich talking about the United States in space.


If the movie is not displaying, you can watch it on the Huffington Post.