Home / Articles / UFO News / New telescope could aid in the search for extraterrestrial life
Astronomers in Australia are keeping their fingers crossed in the hopes that Western Australia will be selected as the home of the world's most powerful radio telescope.

New telescope could aid in the search for extraterrestrial life

Astronomers in Australia are keeping their fingers crossed in the hopes that Western Australia will be selected as the home of the world’s most powerful radio telescope. According to the International Business Times, Australia is in competition with nine African countries, including South Africa, that have made it to a short-list of nominees to become the home of the Square Kilometer Array (SKA) radio telescope. The Sydney Morning Herald reports that Australia is considered to be the best location for the SKA telescope. But, not surprisingly, politics could influence the decision. 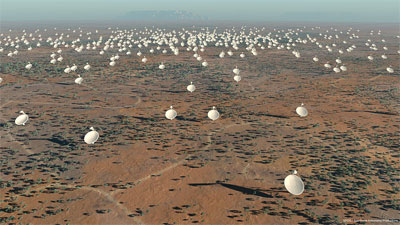 Professor Fred Watson, astronomer in charge at the Australian Astronomical Observatory at Coonabarabran in New South Wales, is a major proponent of building the SKA radio telescope in Australia. The Sydney Morning Herald quotes Watson as stating, “The SKA will be by far the most sensitive radio telescope ever built . . . It will have the potential to reveal all kinds of things ranging from the possibility of picking up signals from aliens, if they exist.”

The SKA radio telescope will also be used to explore dark matter, and to explore the origins of the universe.

A meeting of scientists, engineers and government officials takes place this week, and could provide clues as to which country will be selected as the home for the SKA radio telescope. A group of international scientists is expected to make the final decision in 2012. Construction will then begin in 2016, leading to a projected operational date of 2024.