Home / Articles / UFO News / NASA says flowing water may be on Mars
Data collected suggests that there could be flowing water on Mars.

NASA says flowing water may be on Mars

NASA issued a press release yesterday announcing a major discovery on Mars. Data collected by the Mars Reconnaissance Orbiter (MRO) suggests that there could be flowing water on Mars during the warmest months on the planet. According to the press release, images provided by the MRO show “dark, finger-like features” that “appear and extend down some Martian slopes during late spring through summer, fade in winter, and return during the next spring.” Alfred McEwen of the University of Arizona explains, “The best explanation for these observations so far is the flow of briny water.” 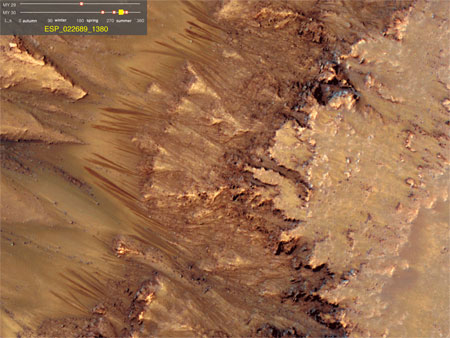 Image of the Martian surface (credit: NASA/JPL-Caltech/Univ. of Arizona)

It was just yesterday that NASA announced the discovery of molecular oxygen in space. And with the possibility of flowing water on Mars, the likelihood of discovering life (as we know it) in other parts of the universe continues to grow.

According to NASA Administrator Charles Bolden, “NASA’s Mars Exploration Program keeps bringing us closer to determining whether the Red Planet could harbor life in some form . . . and it reaffirms Mars as an important future destination for human exploration.”

A detailed report of these findings is in today’s edition of Science.