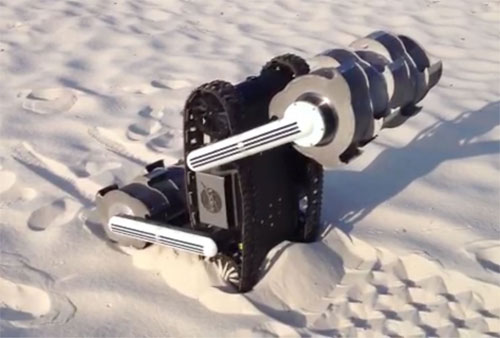 NASA robot could help produce rocket fuel on the Moon

NASA is developing a robot prototype that could assist with future missions to the Moon.

According to Engadget.com, NASA is developing the Regolith Advanced Surface Systems Operations Robot, or RASSOR (pronounced like “razor”), with the hopes of sustaining Moon missions by “extracting water from the lunar soil to produce air and even fuel.” 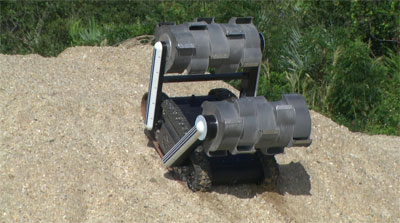 The RASSOR’s design is based on a previous Lockheed Martin design, and features digging bucket drums at each end of the robot’s body. NASA explains that these drums rotate in opposite directions, and they perform “staggered shallow scoops that shave the soil a bit at a time rather than scoop large chunks of it all at once, the way bulldozers do on Earth.” In addition to their scooping capabilities, these drums “can act almost as legs letting the robot step and climb over obstacles.”

The robot is designed to skim lunar soil and dump it into a device that would pull water and ice out of the dirt and turn their chemicals into rocket fuel or breathing air for astronauts working on the surface. The device would be part of the lander that carries the RASSOR to the moon’s surface. So the robot would be the feeder for a lunar resource processing plant, a level of industry never before tried anywhere besides Earth.

NASA reports that ninety percent of a rocket’s mass consists of propellant. So producing these resources on the Moon would considerably reduce mission costs, especially in terms of rocket fuel.

Engineers are refining the prototype, and a RASSOR 2 should begin testing in 2014.