NASA quick to disassociate itself from alien bacteria claim 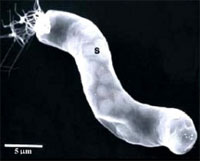 NASA quickly distanced itself from recent claims made by one of their own scientists that certain meteorites contain fossilized remains of extraterrestrial bacteria. When NASA astrobiologist Richard Hoover published a paper with his findings in the latest issue of the Journal of Cosmology, his research was met with skepticism by the scientific community, which resulted in the rare move by NASA to publicly distance itself from the research of one of their own scientists.

According to Wired UK, Dr. Paul Hertz, chief scientist of NASA’s Science Mission Directorate in Washington, stated, “NASA cannot stand behind or support a scientific claim unless it has been peer-reviewed or thoroughly examined by other qualified experts.” Further, Carl Pilcher, head of NASA’s Astrobiology Institute told the Associated Press, “I am not aware of any support from other meteorite researchers for this rather extraordinary claim.”

Hoover’s paper was apparently sent to the International Journal of Astrobiology in 2007, but failed to make it through the peer review process. As mentioned yesterday, 100 scientists have been invited to review the paper that was published in the Journal of Cosmology.