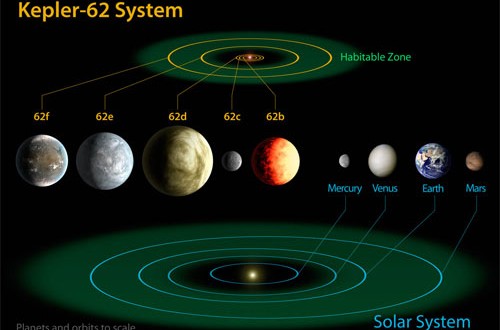 On Thursday, April 18, NASA announced the latest findings from the Kepler space telescope. The mission has discovered “two new planetary systems that include three super-Earth-size planets in the ‘habitable zone,’ the range of distance from a star where the surface temperature of an orbiting planet might be suitable for liquid water.” 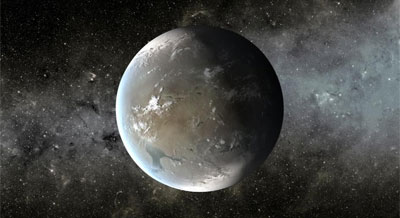 Kepler-62e is only 1.6 times larger than Earth, making it and its neighbor, Kepler-62f, the smallest exoplanets found so far in the habitable zone of their parent star. Kepler-69c is reportedly 1.7 times bigger than Earth and orbits a sun similar to ours.

Some researchers speculate that Kepler-62e and Kepler-62f could be water worlds, covered completely by oceans. Lisa Kaltenegger of the Max Planck Institute for Astronomy and the Harvard-Smithsonian Center for Astrophysics recently stated, “There may be life there, but could it be technology-based like ours? Life on these worlds would be under water with no easy access to metals, to electricity, or fire for metallurgy.” She continued, “Nonetheless, these worlds will still be beautiful blue planets circling an orange star — and maybe life’s inventiveness to get to a technology stage will surprise us.”

NASA explains that “scientists do not know whether life could exist on the newfound planets, but their discovery signals we are another step closer to finding a world similar to Earth around a star like our sun.”