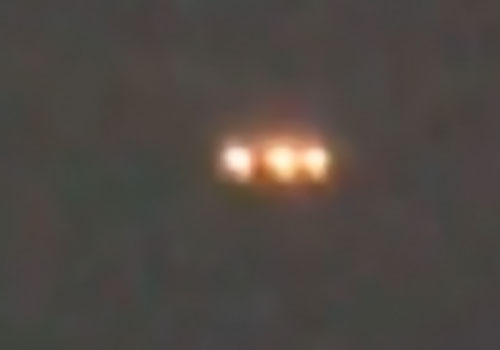 In July 2012, WPDE NewsChannel 15 aired multiple stories about strange lights in the sky witnessed by many people along South Carolina’s Grand Strand. Witness Joe Kiernan explained to NewsChannel 15 that these UFOs “did climbs, they went to altitudes, they changed directions that are beyond physics. It’s just not possible.” And according to Kiernan, these lights are repeatedly seen in the area.

Although Kiernan regularly sees strange lights in both the day and night skies in North Myrtle Beach, the more interesting sightings are happening at night. In a recent interview on the web series Spacing Out!, Kiernan provided the following description of just one of his recent sightings:

A lot of white sparkly lights. Many of them. Dozens. At times, it looked like two dozen, at times it could have been six dozen, or more. They would travel along the sky and weave in and out of each other, and just fly in all different strange patterns. And then they would just stop and fade out. Then one by one, they would just light up with a bright glowing orange, orange-yellowish, just very intense glowing light.

Kiernan says this particular sighting lasted for three hours. And the phenomenon occurred again the following night, and was reportedly witnessed by forty to fifty people.

Although he lacks high-quality camera equipment, Kiernan continues to capture footage of these strange lights that appear on an almost nightly basis. Hundreds of people apparently gather on the beach with Kiernan when these lights are visible, including tourists and police officers. Kiernan has noticed an increase in military activity in the area since the lights appeared. He is open to the possibility that the lights could be extraterrestrial in origin, he isn’t jumping to any conclusions at this point. He is just trying to figure out the identity of these mysterious lights.

Watch the interview with Joe Kiernan below: