Historically, if a UFO sighting is significant enough to make it on the nightly news, it has almost been guaranteed that the same explanation will be given for absolutely every sighting – “It’s a weather balloon.” Weather (or “research”) balloons have been the default report offered by government and other officials when it has come to explaining mysterious areal objects. The balloon response even dates back to the famous 1947 Roswell incident, where a research balloon was offered as the official explanation for a downed craft (after retracting an initial statement about the capture of a flying saucer). Based on responses to recent sightings, however, it seems that the “weather balloon” response has now been replaced by a new default response – “It was a missile test.”

A missile-like UFO sighting was recently observed by hundreds of residents in a rural community in Newfoundland. Witnesses reported the noiseless object rising from the ocean, and shooting through the sky with smoke and flames shooting out its back. The French Ministry of Defence came forward to state that it had launched a test missile from a submarine recently.

Another recent flying object was seen over Xinjiang, China. The bright object had a cone tail, and was flashing red, blue, white, and green lights. The explanation for this object was a ground-based midcourse missile interception test. 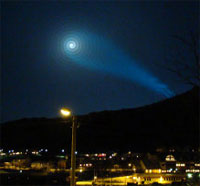 Yet another strange object was seen recently – this one in the sky above northern Norway. As seen in the photo, the sky was filled with a blue trail, leading to a brightly illuminated, spiraling object. This incident has been explained by the testing of a new Russian intercontinental missile. Russia has admitted that their recent test was a failure (which could explain the spiral motion of the object), but Russia’s defense ministry refuses to confirm that the mysterious lights seen over Norway were from their missile test.

It’s possible that several countries are conducting more and more missile tests. It’s also possible that missile tests are the new trendy subterfuge that will replace the weather balloon to explain UFO sightings. Either way, I wonder how many more unusual objects in the sky will be credited to missile tests this year.

Sorry, weather balloon. You’re a has-been. I think you’ve been replaced by something sexier and flashier.