Home / Articles / Mass wildlife deaths occurring globally
Birds, fish, and other wildlife have been showing up dead by the thousands around the world. Some officials have been baffled by the mysterious deaths, while others have claimed that these deaths are natural and happen regularly.

Birds, fish, and other wildlife have been showing up dead by the thousands around the world. Some officials have been baffled by the mysterious deaths, while others have claimed that these deaths are natural and happen regularly. Tests have been done on the animals and their environments to determine if disease or toxins played a role, but none have been discovered so far. Stress, weather, and clumsiness have all been offered by experts to explain the strange deaths, but there does not seem to be any definitive answer in any of the cases. So what is the real cause of so many mysterious animal deaths? Some have speculated that contact with cloaked UFOs could be responsible for some of the deaths, but without any firm evidence, the true answer may never be known.

Here is a partial list of the incidents that have been reported just in the past week: 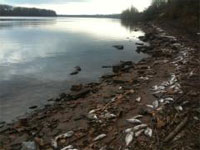 Roseville, Arkansas
The first of these recent mass deaths occurred near Roseville, Arkansas where more than 80,000 dead drum fish washed up along the Arkansas river, approximately 100 miles west of Beebe. The Arkansas Game and Fish Commission and the Arkansas Department of Environmental Quality are still investigating the deaths. Inspectors thought a toxic dump and/or low oxygen levels could be to blame, but no toxins have been detected in the water. Further, a spokesperson from the Arkansas Department of Environmental Quality told KHBS, “It’s a single species kill. We don’t know the cause. We don’t think that’s the case here. You would have other species effected not just drum.”

Beebe, Arkansas
4,000-5,000 dead red-winged blackbirds scattered the ground in Beebe, Arkansas on New Year’s Eve. Initial tests have concluded that the birds suffered physical trauma including internal bleeding. Explanations have included weather, fireworks, and UFOs. Some experts have settled on the explanation of “loud noises” as the cause of death.

Murray, Kentucky
Several hundred dead grackles, cowbirds, starlings, red-winged blackbirds and robins were found scattered for several city blocks around Murray State University on January 3rd. A spokesman for the Kentucky Department of Fish and Wildlife told the local Fox affiliate that a full toxicology screen and necropsy was performed, and the results showed “no poison, no disease, no trauma,” and he went on to state that “there was really nothing they could put their fingers on that would cause the deaths.”

Little Bay, New Zealand
Hundreds of snapper washed ashore on beaches in New Zealand on January 4th. The matter is being investigated.

Thanet, England
More than 40,000 Velvet swimming crabs washed up on beaches along the Kent coast on January 4th. Whelks, sponges and anemones were also found among the crabs. Their death is being blamed on cold weather. 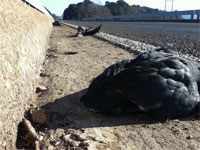 Lake O’ the Pines, Texas
Hundreds of dead mud-hen birds appeared on a Highway 155 bridge at Lake O’ the Pines on January 5th. According to the Texas Parks and Wildlife Department, dead birds on this bridge is a “natural occurrence,” though not usually so many birds at once.

Falkoping, Sweden
50 dead jackdaw birds were found on a street in Sweden on January 5th. CNN has reported that autopsy results show the birds died of “severe internal bleedings caused by external blows.” Fireworks were also offered as an explanation though, as they were reportedly set off in the area on Tuesday night.

Parana, Brazil
A survey has concluded that at least 100 tons of dead fish, including sardine, croaker and catfish, have washed ashore in Parana since December 30th. Authorities suspect an “environmental imbalance” as the cause of death.