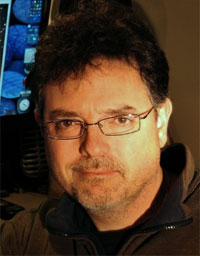 UFO photo/video analyst, astronomer, and model builder Marc D’Antonio is working on a new book about life in the universe. He provided details about this book, tentatively titled The Populated Universe, during his appearance on the weekly web series Spacing Out!

D’Antonio describes The Populated Universe as “a scientific foray into the knowledge to date of Kepler data, other scientific data, while tracing the roots of life of Earth, and in our solar system,” to get a better idea of how life emerges. He explains, “There are a lot of organisms that have become very good at living in extreme environments, and those extremeophiles are the kinds of life we can expect to arise in some of the harsher places like under the ices of Mars, or deep in the hundred mile deep ocean of Europa around Jupiter, or in the geyser plumes of Enceladus around Saturn. So there’s a tremendous number of ways that life can find a way.”

I must admit that, after hearing this, I couldn’t help but think of Dr. Ian Malcolm in the movie Jurassic Park who firmly believed that “life finds a way.”

According to D’Antonio, The Populated Universe will trace how “life finds a way,” and will include 3D illustrations. D’Antonio hopes to have his book completed by his appearance at the International UFO Congress in February, 2013.

In addition to this book, D’Antonio is also working on detailed models for an upcoming movie that explores humankind’s place in the universe. Although he was unable to provide any details about this project, he did mention that the futuristic film will involve a spaceship, and will take place during a time when humans have left Earth behind.

Watch the full interview with D’Antonio below.