Home / Articles / UFO News / Inflatable flying saucer could carry buildings
An Australian company is developing an airship that could carry entire buildings. The SkyLifter is part blimp and part flying saucer, and, like a blimp . . . 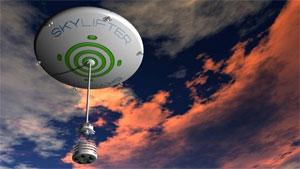 An Australian company is developing an airship that could carry entire buildings.

The SkyLifter is part blimp and part flying saucer, and, like a blimp, it relies on a lighter-than-air chamber for its buoyancy. The 492 foot diameter aircraft will be powered by solar panels and biodiesel engines. The craft is expected to have an airspeed of about 50 miles per hour, and be able to carry more than seven times the payload of current heavy cargo helicopters – approximately 165 tons.

Because of its payload capabilities, the aircraft has possible use for construction purposes. It is also being looked at for recreational use, like an oceanliner in the sky. The company has already hinted at something they are calling a SkyPalace.

SkyLifter is not the first company to consider the flying saucer design for an aircraft, but their 492 foot flying saucer will surely generate many UFO reports.