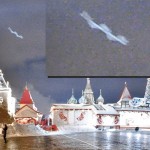 A photograph was recently published to the web, showing a “light stick” in the sky over Moscow. Some believe these objects to be UFOs (the Moscow photo was snapped on December 21. Ooooo.), while others believe them to be living creatures. For everything you ever wanted to know about these things, filmmaker Jose Escamilla has done considerable research on the “light stick” phenomenon, or as he calls them, “rods.” Check out one of his videos some time. 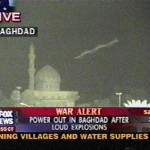 Rods have been seen all over the world. One was even seen during a Fox newscast where a stationary night-vision camera was rolling in Bagdad.

Rods were featured on the History Channel’s MonsterQuest, but the show basically debunked rod theories, stating that rods are probably just bugs.

Regardless of what MonsterQuest or anyone else says, I’m certainly confident that there are plenty of life forms, both in space and right here on Earth, that we have never seen, and possibly some that we are incapable of seeing with our human eyes.