Home / Articles / “Hill UFO” wave startles residents near Albany, New York in 1971
He pulled his head out of the car almost bumping it on the door, finding himself in the center of a bright column of light that he described as a “concentrated search light or something.” 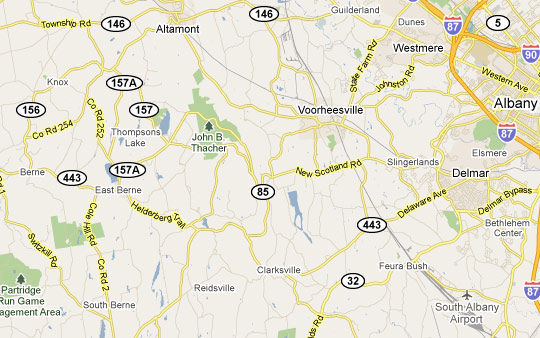 Google map of the area of the sightings.

I was recently alerted to a little known UFO wave near Albany, New York in 1971 by an Open Minds magazine reader named Eric. His grandfather sighted the object when he was a police sergeant in Albany County. Eric later discovered that a local newspaper had covered sightings by other locals.

The Air Force always points to Project Blue Book as its attempt to study UFOs, but what most people don’t realize is that the majority of UFO sightings from that time period were never analyzed by Blue Book.  My Grandfather’s sighting is one of those in the majority.  He is still alive.  He’s 82 and still works as [a prominent city official] in Altamont, New York.

His sighting took place in 1971 when he was a policeman.  I was a teenager when he first told me about it.  He has only told close family members about it because he never wanted to ruin his reputation in the community since he’s a [prominent city official].  Telling the story makes him emotional, as it truly affected him.

Eric also provided a couple of links to news clippings which mentioned other sightings in the area and information on how I could contact his grandfather. He and his grandfather asked that I only use their first names as Eric works for a well known aerospace company and his grandfather, Neil, is a prominent city figure in Altamont, and as Neil noted, unfortunately when you tell people stories like this some people “think you are going nuts.”

I gave Neil a call and he generously gave me a few moments to recount his story. He remembers that it was an evening in the fall of 1971. At the time he was a sergeant with the Albany County Sheriff’s department, working out of the town of Knox. While on patrol there was a call for a deputy to respond to a woman who had seen something in the nearby town of Berne.

On the way to the witness’ home he made a stop to relieve himself along Pleasant Valley lane, which at the time was only fields and wooded areas. While taking care of business he heard a humming noise, which he at first thought was his radio. He went to the car and put his head in the window to see if he was being called, this is when he says he was “lit up.” He pulled his head out of the car almost bumping it on the door, finding himself in the center of a bright column of light that he described as a “concentrated search light or something.” 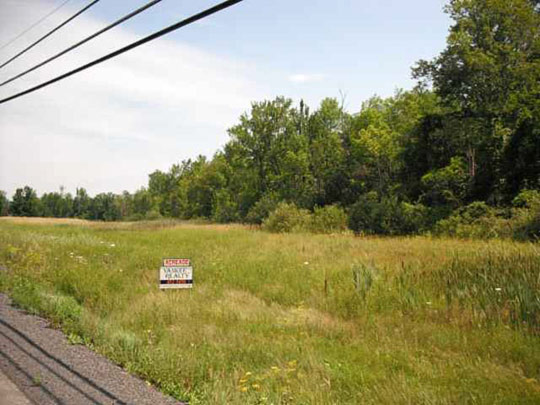 This only lasted a few seconds. The light turned off and the object moved away. Neil had a hard time making out the shape of the object as he was momentarily blinded by the bright light. When his eyes readjusted he saw what looked like a round object off in the distance that took off very quickly, “like a shooting star.” Neil said, “it went so fast I really didn’t have a chance to examine it. They had one hell of a flash light.” The experience was frightening and he was happy that he relieved himself before the event.

At this point his radio came on, it was the deputy with the other witness saying, “Sarge, where are you? You are never going to believe what this woman claims to have seen.” Neil got on the radio and told the deputy that he thought he may have seen the same thing, then got in his car and raced to the location.

When Neil got there he found the deputy, the witness, her friend who had come over with a camera to try and get a picture, and a terrified dog. Neil said the dog was obviously traumatized as if it had been beaten. It was crawling and placed its head in-between his feet and whined.

The woman described seeing a flying disk hovering near her barn in an adjacent field. Neil called an Albany County substation and asked them to get in touch with the airport to ask if they had gotten anything on radar. They said they had gotten calls from hysterical people who had also claimed to have seen something, but they didn’t know what it was.

Ever since this incident he has kept it to himself to avoid unwanted ridicule. His wife has come across a few examples of sightings that are similar to his, including the reaction by the dog. He had also read that UFOs seem to be seen around power lines often. He visited the sighting location and saw that there were power lines in the area.

Neil’s grandson, Eric, prompted Neil to submit his sighting to the National UFO Reporting Center (NURFORC), the report can be seen here. They had estimated the sighting to be in early November. Eric further investigated and found that not only were UFO sightings common during this period of time, but that a local journalist had dubbed the object the “Hill UFO”.

Ricky Blechner of the Altamont Enterprise had a column called Amblin’ ‘Round Altamont, covering local news shorts. He wrote about the “Hill UFO” twice, the first was on November 19, 1971. The column read:

The Unusual “flying craft” that has been seen quite a number of times “on the hill” has created more interest recently after being duly reported. A number of responsible individuals have seen this “craft” with its blinding light hovering in different spots, and generally returning to a “homing” spot over the mountain. Most have been reluctant to report it to authorities for fear of undue and unwanted publicity. Speculation has always been high on the what, how, and why of the UFO’s. There are the believers and disbelievers. Only when you have seen do you become a confirmed believer in UFO’s. There seems to be quite a few confirmed believers, including some mighty scared dogs, up in East Berne. 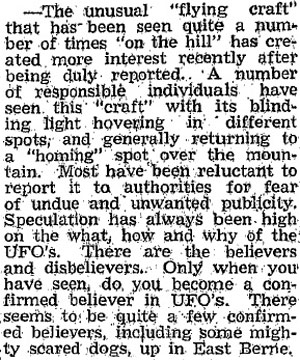 He followed up on the UFO sightings on December 3, 1971, writing:

The “Hill UFO” has been sighted several times during the past week. According to reports it is soundless, and unless you lift your eyes up to the horizon, you might miss it. It could be “right over there”! “Amblin” has begun to feel like the headquarters for this mystery – and delightedly so. If you should happen to have bonafide information it will be well accepted. It has been suggested that all those who have seen the “Hill UFO” might like to get together and compare notes. 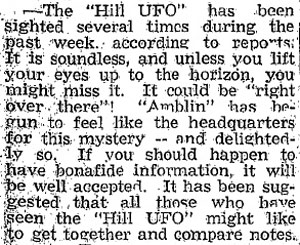 New York has seen many UFO waves over the years. This appears to be one to add to the list. We thank Eric for doing such a great job documenting this event and researching this interesting sighting. If you have had a sighting during this time period in the area, let us know by emailing us at contact@openminds.tv.