Many journalists and people in the general public hold the inaccurate belief that the search for intelligent extraterrestrial life elsewhere in the universe is an enterprise conducted only by over-weight sci-fi dorks living in their parents’ basements. The reality is that respected scientists from around the world have been actively searching for extraterrestrials for decades.

A recent article published by Space Daily contained the wonderful quote, “Most scientists think that we are not alone in the universe.” Many of NASA’s missions involve searching for signs of life in space. NASA released a publication in September 2011 titled The Global Exploration Roadmap, which outlined plans to explore our solar system, and the first objective listed on this road map is “Search for Life.” NASA also recently launched their latest Mars rover, the world’s biggest extraterrestrial explorer, that will comb the planet’s surface looking for signs of life.

But aside from NASA, scientists at universities and major research institutions are actively participating in the extraterrestrial search. An article published today in Harvard University’s daily newspaper, the Harvard Crimson, accurately states, “Discovering extraterrestrial life is not a new goal on mankind’s to-do list.” The field of astrobiology (the study of, and search for, life in the universe) has gained momentum in recent years, and new academic programs in the field are appearing at universities around the country. And just this week, NASA and the Library of Congress announced the establishment the Baruch S. Blumberg NASA/Library of Congress Chair in Astrobiology, housed within the John W. Kluge Center at the Library of Congress. 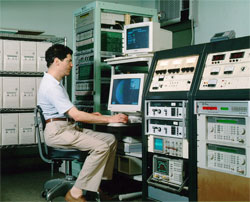 According to the Harvard Crimson, Harvard physics professor and electrical engineer Paul Horowitz is a leading figure in the search for intelligent extraterrestrial life. He was one of the early pioneers of the SETI (Search for Extraterrestrial Intelligence) Institute, which was founded by Frank Drake, a doctoral alumnus of the Harvard Astronomy Department. Horowitz’s SETI work primarily involves using radio telescopes to listen for signals from alien technology.

Another Harvard professor, David Charbonneau, is one of the world’s leading experts on exoplanets, according to the Harvard Crimson. He believes that “within three years, man will likely discover habitable planets on which life could thrive.”

Harvard is just one example illustrating the reality that leading scientists are participating in the search for extraterrestrial life.