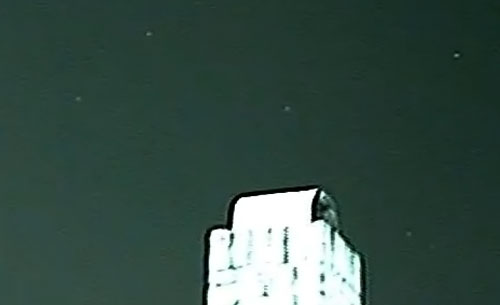 Fleet of UFOs over Melbourne captured on infrared camera

On November 11, 2012, a witness captured infrared camera footage of what he refers to as an “armada” of UFOs over Melbourne, Australia.

The footage was recorded before noon in the Melbourne suburb of Moonee Ponds using a Samsung SDC-435 security camera with a 950nm infrared (IR) filter on the lens. The International Business Times describes:

What the video shows is a strange formation of hovering lights, among others. The lights come in groups, without a particular motion pattern. At least one frame features countless lights moving rather slowly relative to the others.

The witness reports that there were five groups of these UFOs that appeared approximately ten minutes apart from each other. The video posted to YouTube by the witness is reportedly the most significant of these five groups.

A few lights in the video shoot across the screen at incredible speeds and fly in erratic patterns. These are most likely bugs. But most of the lights that appear in this video move in a straight line, move at steady speeds, and do not alter their courses at all. The incredible volume of lights in the sky at the same time is unusual, and the fact that the objects were reportedly not visible with the naked eye adds the mystery. But the behavior of these lights is consistent with conventional aircraft, and there are several airports in the vicinity, including a military base.

What do you think the identity is of the objects comprising this “sky armada?” Watch the video below and share your thoughts in the comment section below, or on the Open Minds Facebook page.