Flash of light in Phoenix identified?

Last week, we reported on a mysterious bright flash of light that occurred during a live television broadcast on Fox 10 in Phoenix, Arizona on the morning of Thursday, March 8. New information obtained this week provides a possible explanation for the strange flash of light. 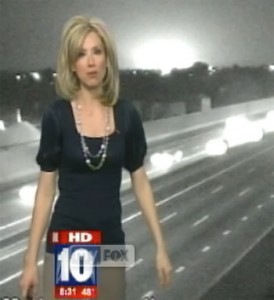 Following the incident, Fox 10 contacted local utility providers to see if they could provide an explanation for the light flash, but none of those companies could. But days later, a different story emerged. Local utility company Arizona Public Service (APS) confirmed on Monday, March 12 that an electrical line breaker opened, causing the flash of light, and resulting in a temporary power outage in the area.

Although Fox 10 contacted APS and specifically asked them about the incident last week, the station reports that APS simply did not realize there had been a breaker issue in the area until an employee came forward over the weekend to report that he had been called out to the area to address an open breaker. According to Fox 10, “The lights were out for a few seconds then they came back on. There was no damage to equipment and no power lines had to be replaced.”

What do you think about this explanation for the strange flash of light? Does a power company not know when its employees are called out on jobs? Would a light blast like this one that reportedly knocked out power really cause no damage to electrical equipment? Share your thoughts with us on the Open Minds Facebook page.